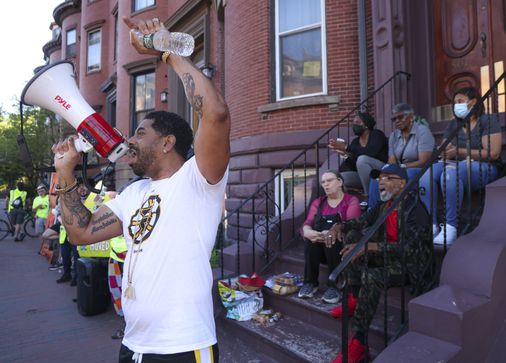 “I have bars on my window, my bedroom window, so I can’t get out,” Harrison said at the vigil. “There’s a bar in the kitchen that I can open and then climb over the ledge – but I wouldn’t step on that escape route.”

Harrison, who works part-time for the Massachusetts Historical Society, said he also helped look after his building and its other residents — before they left — by collecting cash rent for the landlord and helping to install a security camera, but last September the owner told him he had to leave in January.

The property owner could not be reached for comment Thursday evening.

The vigil included many representatives from the City Life/Vida Urbana affordable housing advocacy group, which is helping Harrison oppose his eviction.

Supporters said the loss of these units highlights the city’s affordable housing crisis. They point out that a City Life/Vida Urban report on evictions during the COVID-19 pandemic found that 70% of eviction requests were for properties in census tracts where most tenants are, like Harrison, people of color.

The group said Harrison had put his name on waiting lists for affordable housing in Boston and Cambridge, but was years away from reaching the top of either list.

Outside Harrison’s home on Thursday, supporters clustered on the sidewalk and chanted, “We fight for justice, stop evictions, stop evictions” and “When we fight, we win!” Passing cars honked their horns in support.

Harrison’s daughter, Mariama Council-Harrison, said in an emotional speech that she felt a weight gain when City Life/Vida Urbana told her family her dad could stay home.

“Just to see how my dad’s spirit is and to see him so broken, it’s just good to see people fighting for him,” she said.

Paula Coar, a City Life organizer who planned the vigil, said the organization learned of Harrison’s situation through her daughter and then discovered that seven other residents of the building had received notices of eviction and quickly moved out.

“I called Mr. Harrison and said, ‘Is this your property where people are being evicted? He said yes, and I said, ‘OK, we have to fight. That’s all I know how to do,” Coar said.

The organization encouraged Harrison to stay in his apartment and helped connect him with a lawyer to oppose the eviction.

“It was insensitive to him, and insensitive to anyone, [especially] during the pandemic,” Coar said. “We want people to know we are here; we will inform you of your rights; we will come to court with you; we will do what we can – and you will have to fight with us too.

Jamaica Plain resident David Weinstein, 77, said he had opposed evictions at City Life events since the 1970s and was happy to show his support for Harrison.

Sophie and other pets for adoption from Phoenix-area shelters