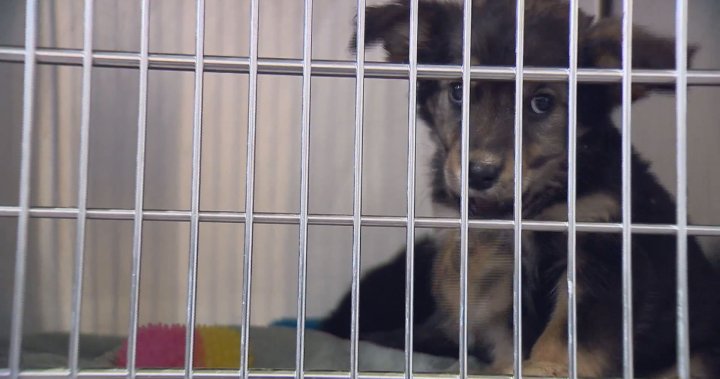 Kennels are full at the Alberta Animal Rescue Crew Society after the organization saw an influx of animals over the past two weeks.

“We just reopened two weeks ago and it was just an influx of animals that came in, and again we are at maximum capacity of what we can handle right now,” said said AARCS Executive Director Deanna Thompson.

Thompson said the number of abandoned pets isn’t the only reason AARCS is at capacity.

“The lack of available veterinary care is difficult,” Thompson said, noting that’s another contributing factor. “We had to outsource some of our care to local clinics, so getting these animals ready for adoption was a bit slower.”

An influx of large litters of pets has also added to the problem.

“We’ve had a few big pet cases, so we recently took in 35 cats from a family whose caretaker passed away,” Thompson said.

She noted that there is a solution to help bring these numbers down so that AARCS can start welcoming animals again.

“The key to saving lives right now is having people who can temporarily care for these animals and that’s been a really big fight for us right now.”

AARCS relies only on foster homes to care for animals while they wait for their furry homes, but with COVID restrictions ending and summer here people are going on vacation and Thompson said that they had trouble finding these temporary helpers.

“Even puppies that are normally picked up very quickly from foster care are waiting here for someone to temporarily house them until we can find new homes for them,” she said.

Thompson hopes the intake freeze will only last about a week, but added that it all depends on how many animals they can place in foster care in the near future.

For more information about AARCS or how you can help, click here.

1:51
AARCS on lockdown after distemper outbreak

AARCS on lockdown after distemper outbreak – May 31, 2022