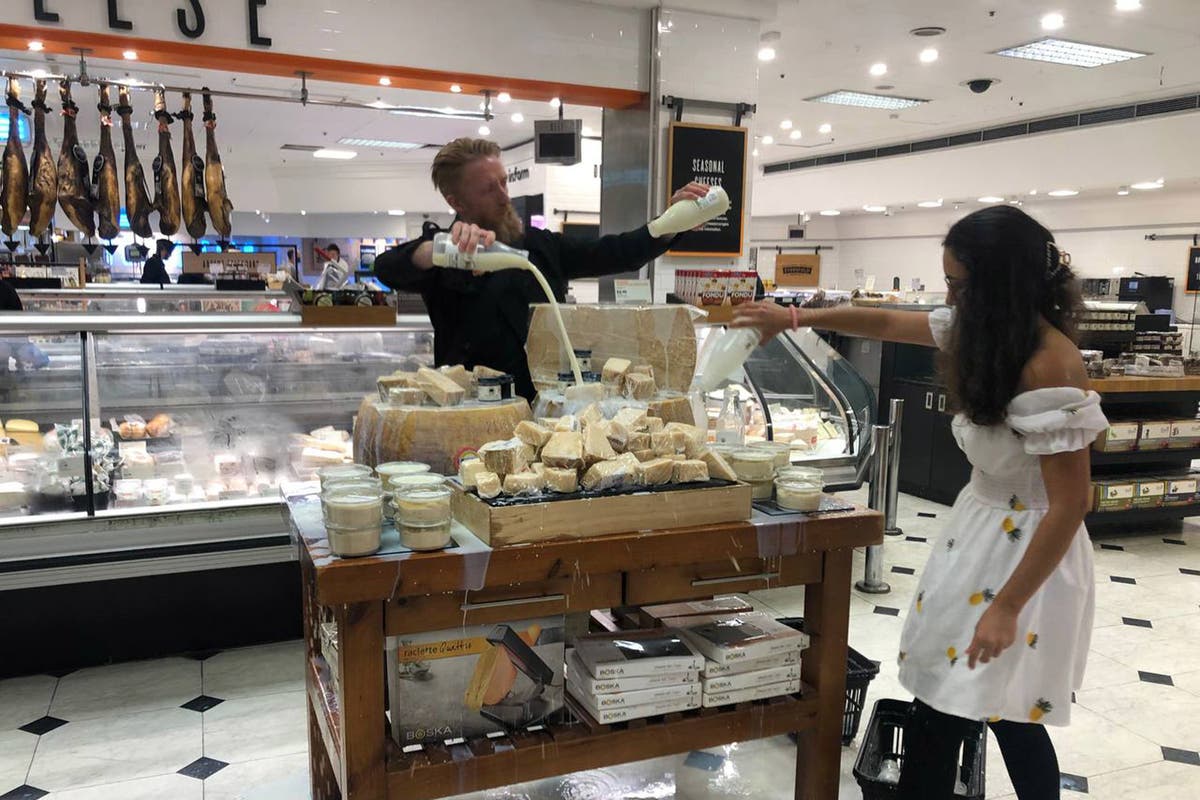 Animal rights activists poured milk into two high-end department stores in London to protest against the use of dairy products.

Animal Rebellion said the man and woman involved were Steve Bone, a photographer from Thorpe-Le-Soken, Essex and Sofia Fernandes Pontes, a student from Madeira, Portugal.

Mr Bone and Mrs Fernandes Pontes entered Fortnum & Mason on Piccadilly at 11.35am, took milk from the shelves and emptied it onto the store floor.

Video showed them then being escorted out by security personnel. The same two activists then entered Selfridges on Oxford Street around 12.30pm.

They were filmed pouring milk on a cheese rack. An off-camera person asked the staff, “Aren’t you stepping in?”

The staff member replied, “We’re not allowed to.”

Another viewer said, “F***ing ashamed of yourselves.”

As the activists started to leave, he said, “Yeah, go for it now. Get the hell out.”

Another bystander blocked Ms Fernandes Pontes as she walked away, grabbing her neck with his outstretched arm.

The activists were then escorted out by security personnel.

Animal Rebellion said the couple had taken steps “to highlight the need to shift to a plant-based food system and a sustainable way to feed the planet, free from animal exploitation”.

Ms Fernandes Pontes said: “I don’t want to see my children growing up in a world surrounded by drought, destruction of nature and food shortages. I want them to see a world full of wildlife and beauty.

“The transition to a plant-based future is simply essential if we want to see a better world for all, helping farmers transition to profitable and sustainable plant-based production is a no-brainer for (Prime Minister) Liz Truss and (Environment Secretary) Ranil Jayawardena.

Mr Bone said: ‘I took action throughout September to push for a plant-based future, and I am taking action again today because Liz Truss and Ranil Jayawardena still refuse to listen. .

“My granddaughter’s future is at stake and the government’s response is to ignore the advice of Oxford and Harvard and instead choose to drag us all further into the climate, ecological and global crises. Cost of life.”

The action comes the day before Animal Rebellion’s plan to occupy the capital.

Activists will gather outside Green Park tube station at 11 a.m. Saturday for a protest and march.

The Red Cross is working 24 hours a day, 7 days a week to help victims of the storm in Florida