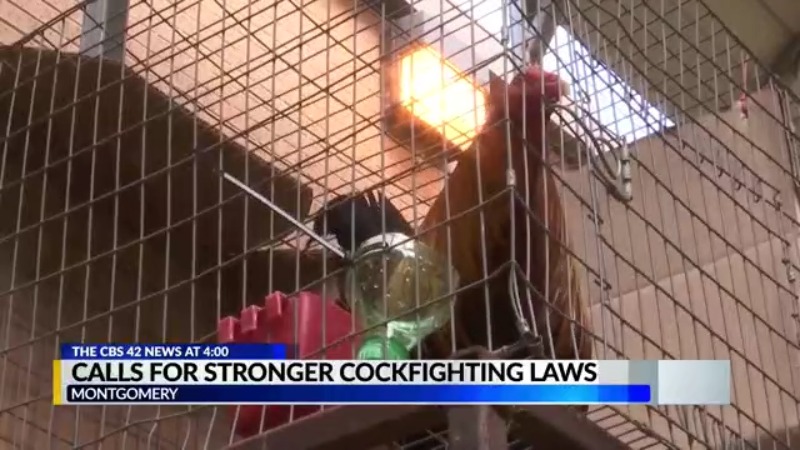 Currently, the penalty is a $50 fine. Animal Wellness Action executive director Marty Irby says Alabama has the weakest cockfighting laws in the nation.

“We don’t want Alabama to be considered the cockfighting capital of the south, and right now it’s leading the way based on the number of birds we’ve seen shipped to other countries and U.S. territories. “Irby said.

Irby is from Mobile and says he’s spoken to lawmakers there about changing the law, but doesn’t see it happening.

“One told me that if he introduced a bill to make cockfighting a crime in Alabama, the cockfighters would come and burn down his hunting camp because they were just down the street from his hunting camp,” Irby said.

“We have other places where we have to spend our resources — drug issues, burglary, child abuse, crimes against people,” Shearon said.

Shearon says the level of resources involved would parallel that of a drug investigation, but with a penalty sometimes less than a speeding ticket.

“Local agencies, we just don’t have the money. We have to prioritize our cases over the things we do,” Shearon said.

Assistant District Attorney for Alabama’s 19th Judicial Circuit, which includes Chilton County, CJ Robinson says he would pursue cockfighting if cases are brought, but he doesn’t see that happening with a $50 fine $.

“You can go through a drive-thru at McDonalds during lunchtime and that person is probably booked in and out by the time you get your happy meal. It’s so fast. When you talk about that versus the punishment being a $50 felony, it’s just not worth the resources that are put into it, and unfortunately our state hasn’t made it a priority,” Robinson said.

The last time a law was introduced was in 2019 to make the crime a Class A misdemeanor and increase the fine to $300, but that bill failed.