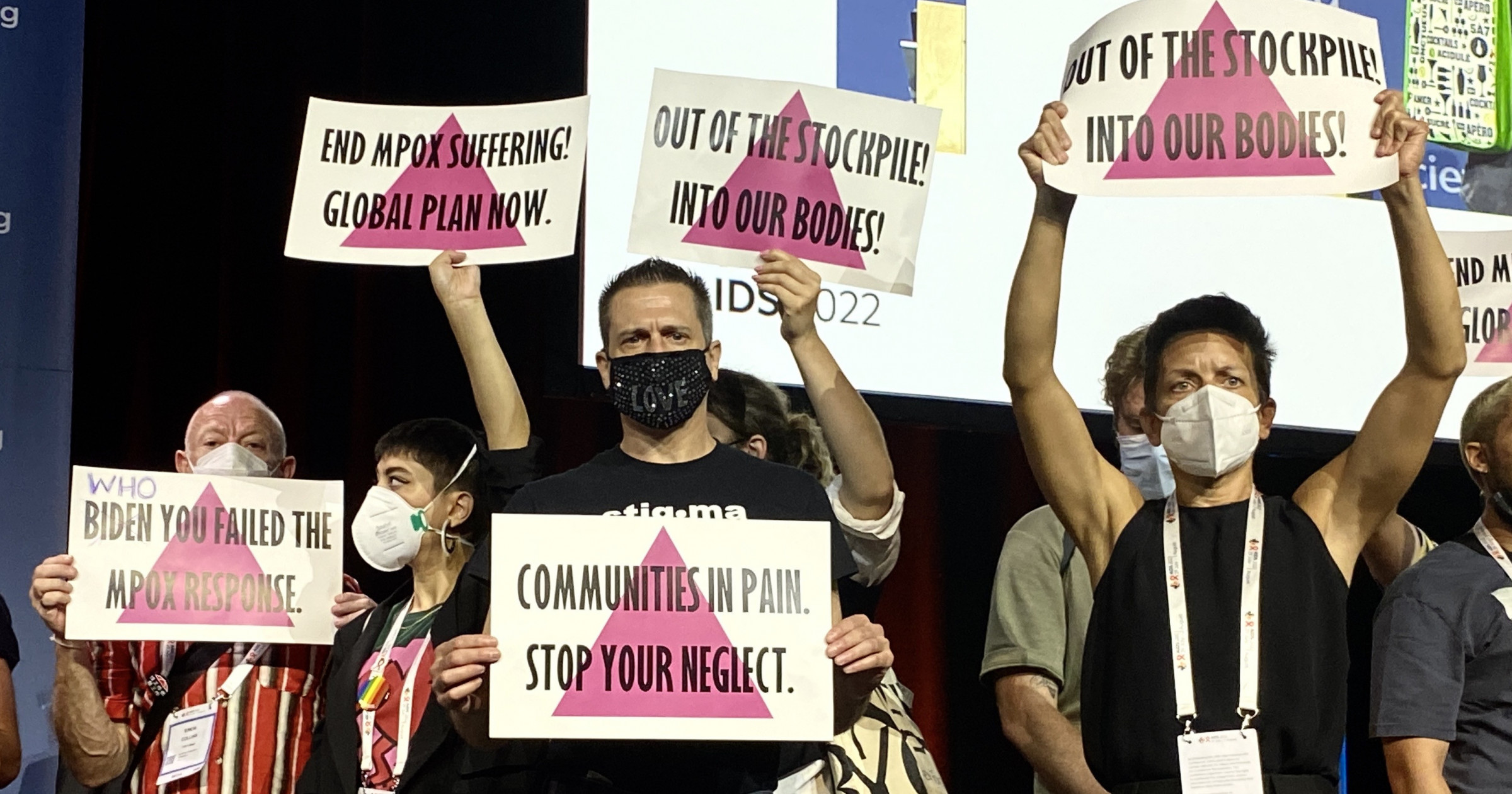 Leading experts and public health officials discussed national and global responses to the growing monkeypox epidemic at the 24th International AIDS Conference (AIDS 2022) this week in Montreal, but advocates say the world is not not doing enough to deal with the crisis, which mainly affects gay and bisexual men.

Opening a hastily organized media roundtable on July 31, the new president of the International AIDS Society, Sharon Lewin, said she hoped AIDS 2022 would lead to a more equitable global response to monkeypox. “Having worked in the HIV field for so long, we want to make sure that some of the mistakes made in the early response to HIV will not be repeated in this situation.”

As of August 2, the Centers for Disease Control and Prevention (CDC) has identified 6,326 cases of monkeypox in all but two states. Worldwide, there are now more than 25,300 cases, most of them in countries where monkeypox had not been reported before this outbreak.

While anyone can contract monkeypox through close physical contact, cases remain extremely concentrated among men who have sex with men three months into the outbreak, even though testing for others groups have increased.

According to the August 2 WHO situation report, 99% of monkeypox cases are in men, 98% of whom identify as men who have sex with men. Sexual activity was the most common route of transmission, reported in 92% of cases. Of the cases with known ages, only 25 were children 4 years of age or younger. Five cases in children have been reported in the United States, likely related to family transmission.

Before the current outbreak, experts believed that monkeypox was not easily transmitted from person to person. In central and western Africa, the number of cases has been low and stable for decades, often linked to contact with animals. In a 2003 outbreak in the United States, nearly 50 people were infected through contact with prairie dogs, but there were no confirmed cases of person-to-person transmission.

But sex networks provide a niche for the rapid spread of monkeypox – and it may not be a new phenomenon. Speaking via video at a monkeypox symposium on Monday, Dimie Ogoina, MBBS, from Niger Delta University in Nigeria, described the changing epidemiology in that country, where monkeypox monkey is endemic. As NPR recently reported, Ogoina was among the first to observe that during a 2017 outbreak in Nigeria, monkeypox cases shifted to young, urban males without traditional risk factors, suggesting the virus spread. spread through sexual contact.

Reporters posed many questions during the media roundtable, but Marina Klein, MD, of McGill University in Montreal, acknowledged that many still don’t have answers. It’s not known the exact mechanisms of transmission, whether the respiratory route is important, or whether people can transmit the virus before they develop symptoms. Additionally, there are few data showing how well the new vaccine Jynneos (also known as Imvanex or Imvamune) works or whether treatment with TPOXX (tecovirimat) reduces symptoms or decreases virus shedding, which which has implications for the period of isolation.

@profchloeorkin ask CDC and WHO when they will update their #monkeypox definition to include newly described presenting symptoms such as proctitis – the answer was yes, it must happen soon! pic.twitter.com/qyP2mlVf0G

In this case series, of those with known HIV status, 41% were HIV-positive, most of them on effective antiretroviral therapy. Reassuringly, there was no difference in overall outcomes between HIV-positive and HIV-negative people, Orkin said.

However, people living with HIV have a weaker response to the first dose of the Jynneos vaccine, suggesting that they should be prioritized for second doses. One study (MVA-011) found that 67% of HIV-positive people and 83% of HIV-negative people had an adequate immune response four weeks after the first dose, rising to 96% and 98%, respectively, after the second dose. .

The uncertainty about the effectiveness of the vaccine is reflected in the different protocols from country to country. The Food and Drug Administration (FDA) maintains that Jynneos is a two-dose vaccine and that people need both doses. Many cities and countries administer one dose initially, to partially protect as many people as possible right away, but there is confusion about if and when people will need to get the second dose.

Health officials, clinicians and advocates agree that the global supply of monkeypox vaccines is not keeping up with demand. Unlike AIDS and COVID-19, vaccines and treatments for monkeypox already existed when the new epidemic emerged because they were developed, produced and stockpiled in the event of bioterrorism involving smallpox, a related virus.

But critics say these tools have not been deployed effectively. While Montreal has enough doses to supply visitors – an offer that many gay and bi attendees have taken advantage of – other countries have limited supplies. Even as gay and bisexual men in American cities line up to receive rare doses, most countries, including African nations that have been battling monkeypox for decades, have no access at all. to the vaccine.

Demetre Daskalakis, MD, MPH, director of the CDC’s Division of HIV Prevention, said the mismatch of supply and demand in the United States will likely continue through the summer and into the future. ‘fall. On August 2, the White House announced that FEMA’s Robert Fenton had been named the new national monkeypox response coordinator, with Daskalakis as deputy coordinator.

As Daskalakis began to speak at the symposium, dozens of protesters, including many veteran AIDS activists, stormed the stage, demanding broader and fairer access to vaccines and treatments for smallpox from the monkey in the United States and around the world.

Although the United States has the lion’s share of the world’s supply of Jynneos, American advocates are particularly frustrated that some 800,000 finished doses have sat unused for weeks at a factory in Denmark awaiting a delayed FDA inspection. .

“We need to act now,” said James Krellenstein of PrEP4All, who has taken the lead in monkeypox advocacy. “We are in a worsening epidemic that could have been easily avoided.”

The campaigners’ list of demands includes “decisive leadership” from the WHO and the United Nations on global access to the monkeypox vaccine and treatment, including efforts to scale up production. Currently, only one facility in Denmark can produce the Jynneos vaccine, with a production capacity of less than 50 million doses per year. They called for an “immediate transfer of intellectual property, know-how and technology” to manufacturers around the world capable of making vaccines, treatments and diagnostics.

The protesters demanded that the global response to monkeypox prioritize vulnerable populations and communities and called for funding and support for those who need to self-isolate. But, they stressed, increasing funding for the monkeypox response must not come at the expense of ongoing efforts to fight HIV, tuberculosis, hepatitis C and sexually transmitted infections.

“We need to increase capacity rather than jeopardize the momentum we have to deal with the simultaneous pandemics of today and those to come,” said Emily Bass of PrEP4All.