A former emergency shelter run by the Salvation Army is being transformed into a Way Out Center.

On Friday, the mayor of Spokane, Nadine Woodward and elected leaders from across the region gathered in what was, until recently, an emergency homeless shelter. With a big smile, Woodward cut the ribbon signifying his transformation into the “Way Out Center”, run by the Salvation Army.

The former Mission Avenue shelter has been transformed into a “transitional housing” program intended to provide a “measure of accountability” as well as “compassionate support” to help people move out of homelessness, says Woodward. It is referral-based and will provide housing, employment, addictions, behavioral health and other services to help up to 60 people exit homelessness at a time.

For Woodward, that was the kind of homeless solution she campaigned on.

But while City Council Chairman Breean Beggs and City Council Member Betsy Wilkerson applauded his support, they remain concerned about the city’s immediate plan for emergency shelter this winter. Turning the Way Out Center into a high-barrier program means the city is losing the 100 low-barrier beds at the old refuge, which don’t require sobriety, which may be needed this winter.

Although the city has added other permanent low-barrier shelter spaces in recent months, shelters for women and families are already having to turn people away. Joe Ader, executive director of Family Promise, said the Open Doors emergency shelter was turning down “100 people a month.” Hope House, the downtown women’s shelter run by Volunteers of America, rejects dozens of women every week, mostly due to understaffing at the shelter.

That is why, just the day before the dedication ceremony, council members roasted city staff on the shelter space for the immediate future. And they didn’t seem happy with the answers.

“I know we have a long term plan, but we need a short term plan, and we’re waiting to find out what that looks like,” Wilkerson said. 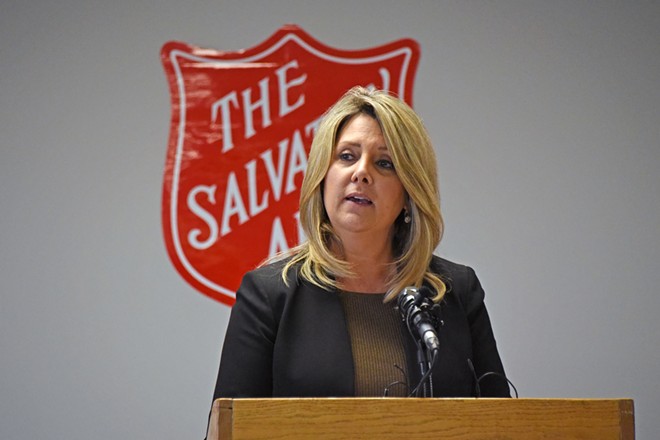 Mayor Nadine Woodward speaks at the dedication ceremony of the Way Out Center.

The struggles at the last minute to find shelter winter has been a recurring problem in recent years.

In recent years, the city has opened temporary warming centers to at least get people off the streets on cold winter nights. But this year, city officials have no immediate plans to open more warming centers.

Instead, city spokesman Brian Coddington said the city has focused on transforming the former warming center spaces into more permanent shelters, in a bid to provide more stability and consistency in the shelter system. According to Coddington, making these shelters permanent should also make it easier for shelter providers to hire staff.

For example, in the past, the Truth Ministries Hut has contracted with the city only during the winter months for a low barrier space. Now the city has finalized a contract with Truth Ministries to make these beds available year round.

“These are in place now and have been for a few months,” Coddington said. “You don’t have to buy these beds depending on the weather. They’re there.”

The city also finalized a year-round contract with the Guardians Foundation to run an emergency shelter on Cannon Street. This location, too, has been managed as a temporary shelter space until recently.

In addition, Volunteers of America and Transitions have jointly opened 30 new beds especially for young adults.

But these permanent shelter spaces are still below the total number of low-barrier beds available last winter. The city launched a request for proposals for flexible surge capacity in shelters last week, but that process will take several weeks. Mayor Woodward included dollars for another low-barrier shelter in his budget proposal for next year, but that also wouldn’t solve the immediate need for shelter.

“We’re definitely going to need more pop-up installations throughout the winter,” Ader said. “And there is currently no solid plan in place.”

Coddington, however, says the town Is have a plan to deal with the overflow of shelters. If there is no room, the city will continue its hotel voucher program, which temporarily places homeless people in hotels or motels. The city used COVID relief money to pay for the vouchers.

Ader says it’s a fix for some people, but it’s expensive and can be difficult for large families because there are so many people in a small hotel room.

“I expect hundreds of families to become homeless. And Spokane is not equipped to handle the homeless population. There is not enough room.”

However, the hotel vouchers worked pretty well for Gina Jose, a 38-year-old mother of four who became homeless in February.

Her owner said her children, three of whom have serious behavioral health issues, were causing property damage and a safety risk – a way around the moratorium on evictions. And for Jose, finding another apartment was impossible with Spokane’s miniscule vacancy rate.

“There was literally nothing available,” says Jose. “The spaces available were over $ 2,000 per month.”

Homeless, the family remained at the Open Doors shelter run by Family Promise. Then, while the shelter was full and dealing with COVID-19 outbreaks, Jose and his children stayed in a downtown hotel, paid for with the city’s COVID relief funds, until September, date to which they eventually got their own apartment.

Jose says she would rather stay in a hotel with her children instead of a shelter. But with the moratorium on evictions expiring, she – like shelter providers and homeless advocates – fears what could happen with an influx of homeless people into families.

“I expect hundreds of families to become homeless,” says Jose. “And Spokane is not equipped to handle the homeless population. There is not enough room.”

To compound the problem, staffing issues are forcing existing shelters to downsize.

Hope House last week had a capacity of 80 beds but staff only numbered 40 to 50 beds, said Fawn Schott, president and CEO of Volunteers of America Eastern Washington.

“It breaks the hearts of my team to have empty beds in the shelter,” says Schott. “We didn’t build a shelter to have empty beds. It’s incredibly painful to do that. But I can’t risk the safety of my staff having one or two people with 80 women.”

During the meeting, Council Member Karen Stratton expressed her disappointment that neither Woodward nor City Manager Johnnie Perkins were there to explain the plan, calling their absence “the elephant in the room.”

“If we fall asleep next Monday and the temperatures drop below freezing,” Stratton says, “we’ll wake up and start answering phone calls from people on the street unable to find beds.” ??