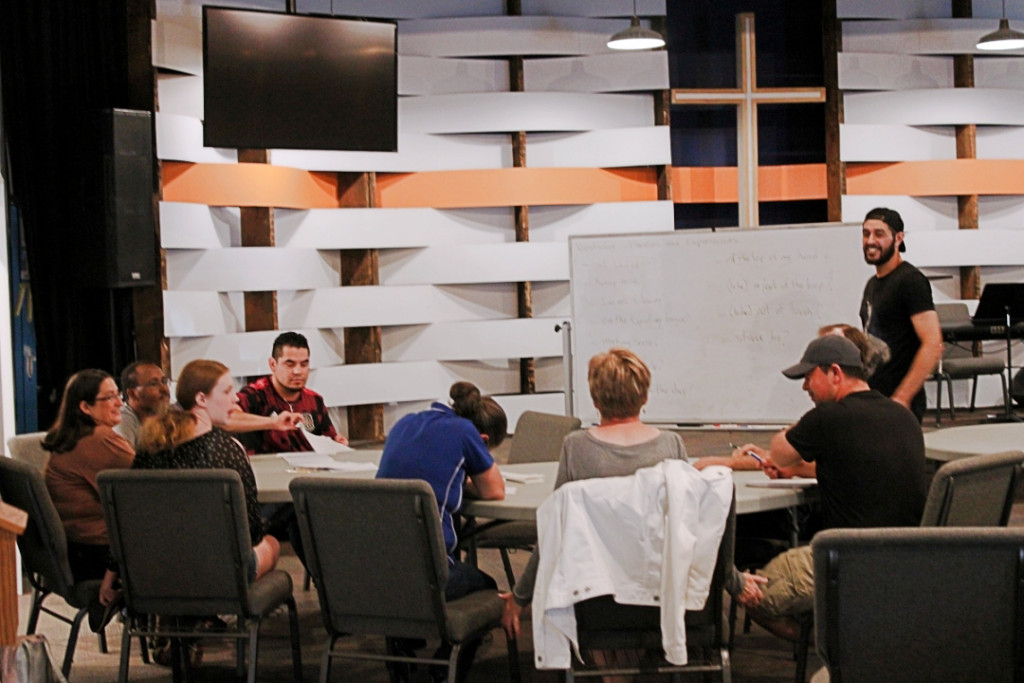 BROOKINGS – Thursday evenings are busy at the Brookings Multicultural Center – this is when the center hosts a free ESL course.
“I have a pink print shirt,” said Qian Ye, who is originally from China and has lived in Brookings for nearly five years. The lesson covers clothes with words like T-shirt, blouse, pants, suit and even hoodies or hooded sweatshirts. Another list has types of materials – wool, nylon, cotton. Another says “plaid, gingham and Argyle”.
Five to 25 students come for the one to one and a half hour class led by Luis Vazquez, originally from Mexico. Vazquez, who works on dairy cow genetics on a farm near Elkton, moved to South Dakota four years ago after working as a rancher in New Mexico.
Prior to COVID-19, the Multicultural Center offered two options — a Thursday ESL class specifically for the Latinos Vazquez teaches, and a Monday class for those from other countries.
However, “now that we have a smaller group, everyone comes to class on Thursdays. However, we plan to offer the Monday class this fall,” said Marilyn Hildreth, Chair of the Multicultural Center Board of Directors.
The class is a joint effort between volunteers whose first language is Spanish and those who don’t speak Spanish who help participants learn and practice English. Classes are aimed at those who are working full-time, so they take place at a somewhat slower pace than a university ESL course. After the lesson, the volunteers work one-on-one with the students, practicing what they have learned. Free childcare is also available during lessons.

Offering English as a Second Language to Latinos
Vazquez heard about the Multicultural Center through Maristela Rovai, an associate professor in the Department of Dairy Science at SDSU and a dairy specialist at SDSU Extension.
“Maristela brought me here for another activity, and I told her that if I had the chance to teach (English as a second language), I would, but there was no room”, he explained.
Vazquez then worked with Hildreth to offer an ESL class for Latinos on Thursdays.
“One of the ways you know you know something is that you’re able to teach it,” he said.
Like Vazquez, volunteer Patricia Villamediana, an SDSU Extension dairy specialist, got to know the Multicultural Center through Rovai.
“It’s perfect for me because I can practice my English skills and help Spanish speakers communicate. It is not a job, but a very useful activity for Spanish speakers,” explained Villamediana.
The native of Venezuela, who obtained her doctorate. from the Autonomous University of Barcelona, ​​works with farmers in South Dakota to increase the sustainability and efficiency of their dairy farms. She works at the Watertown Extension office but currently lives in a house in the SDSU dairy unit north of Brookings.

Practice conversation skills, vocabulary
Those attending the class include both newcomers to the United States and those who have lived here for years.
“This course helps me with vocabulary and conversation,” said Alejandra Forero Salamanca, originally from Colombia.
She came to Brookings in November to do a one-year internship in swine nutrition at SDSU. The internship is necessary for her to complete a bachelor’s degree in animal sciences from the Pedagogical and Technological University of Colombia. Improving her English will not only help her communicate during her internship, but will also help her prepare to take the English proficiency exam required to start her graduate studies here after completing her undergraduate degree.
“This course helps me learn more about the language and culture and make more friends,” said Alfonso Gomez, originally from Mexico. He lives in Elkton and has worked on a dairy farm there for 12 years.
“There are nice people here, like Marilyn, Luis and Gene, who make me feel welcome.”
Through the Multicultural Center, Gomez and the other students learn about American traditions, such as Halloween and Thanksgiving, and also have the opportunity to share their cultural traditions.

Volunteers are in contact with students
“I like working with people who can’t communicate well but are willing to try. I have met many genuine people who want to grow and be part of the community. It’s encouraging to be around people like that,” said Gene Olson, who credits Hildreth for encouraging him to get help with the ESL course.
Charleen Weismantel, who moved to Brookings from Watertown two years ago, helps with ESL class and attends the Multicultural Center’s Friday coffee group.
“I’ve met such amazing people,” she said.
Prudence DeBates, who has lived in Brookings for 11 years, became interested in working with English language learners because she majored in German.
“I thought it would be fun,” said DeBates, who taught German for several years and lived in Germany and Italy. “I had the experience of learning and understanding another language and how difficult it is.”
Thanks to her language training, she can also help “explain some of the grammatical things”.
“People are just great. It’s also about making them feel welcome and connecting with them,” said DeBates, who has also worked with ESL students at Elkton.
When COVID hit, the Elkton class moved to a virtual platform and she continued to work with a student via Zoom. She and other volunteers also helped their students renew their passports and work permits, driving them to appointments in Minnesota and Nebraska. “If you don’t have wheels here, you’re stuck,” she added.
“When I retired from my previous job to work full-time on the farm, I knew I had time to volunteer for an organization and that’s what I chose,” said Julie Ross, who along with her husband Bill owns Good Roots Farm. and Gardens.
She attends the center’s Friday coffee group and helps with the ESL class. She speaks some Spanish because she and her husband have served as missionaries and non-governmental workers traveling to distant lands on several continents. “I’ve been to Guatemala more than 20 times,” she says.
Through their experiences, Ross, Weismantel and DeBates agree that “we receive more than we give”.
“It’s fun to meet people from some of the countries we’ve been to,” Ross continued. “The leadership (at the Multicultural Center) is great, wonderful to work with and open to ideas. It’s about building confidence to interact with people who are new to the community and giving them due respect. It’s not about you, it’s about them. We want to have our arms wide open to welcome them.