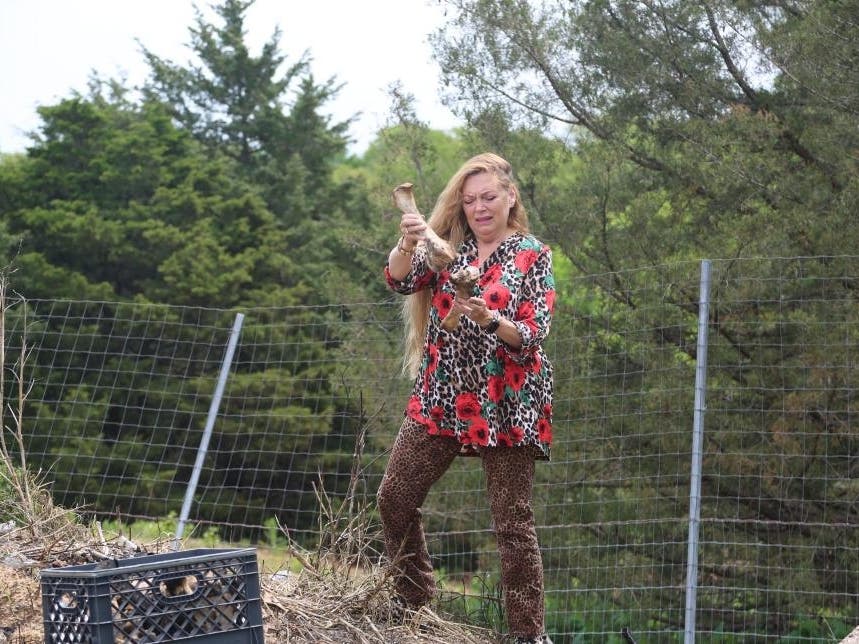 As Netflix prepares to air Season 2 of “Tiger King,” the docuseries that portray Baskin in an unflattering light, the animal rights activist-turned-media celebrity prepares to tell her own story in a two-part docusery of Discovery Channel titled “Carole Baskin’s Cage Wrestling.”

The series premieres on November 13, four days before the “Tiger King” Season 2 premiere on Netflix.

On the show, Baskin said she had a chance to tell the story left out in the sensational “Tiger King – Murder, Mayhem and Madness,” which originally aired on March 20, 2020.

On Monday, Baskin and her husband, Howard, filed a petition in federal court in Tampa seeking a temporary injunction against Netflix and producers Eric Goode and Rebecca Chaiklin to prevent them from airing season 2 of “Tiger King.”

Howard Baskin said producers misled them in 2014 when they were approached about appearing on the Netflix series. Carole Baskin, CEO of the 67-acre Big Cat Rescue nonprofit in Tampa and nationally recognized big cat lawyer, said she was told Netflix was producing a documentary about atrocities committed by roadside zoos.

Instead, “Tiger King” focused on Baskin’s ongoing feud with a flamboyant and morally questionable character named Joe Exotic, whose real name is Joe Maldonado-Passage. He is serving 22 years in Oklahoma prison after being convicted of trying to hire a hitman to kill Baskin and shooting five tigers in his zoo.

However, when Netlix released a trailer promoting Season 2, the Baskins said they were shocked to see they were highlighted. Howard Baskin said upcoming docuseries contain videos and audio recordings of him and his wife that they never allowed producers to use.

In “Carole Baskin’s Cage Fight,” the Baskins say the audience will learn how Baskin and his team have spent years fighting unscrupulous zookeepers trying to make a profit at the expense of the animals they were tasked with protecting.

Baskins said her big cat advocacy often puts her in potentially explosive confrontations with zookeepers, including one documented in the Discovery series involving Jeff Lowe, who took over the Oklahoma Zoo founded by Joe Exotic, Greater Wynnewood Exotic Animal Park.

Lowe was forced to abandon the zoo after Baskin won a lawsuit against Joe Exotic and received the zoo’s deed of ownership in June 2020.

Puzzled, Lowe moved his zoo animals to a nearby property in Thackerville, Oklahoma, which he called Tiger King Zoo. This endeavor was also short-lived. Lowe lost his license to operate the zoo in August 2020 after inspectors reported squalid conditions.

Meanwhile, Baskin’s protests against Lowe’s treatment of animals reached the nation’s Capitol. On May 20, the US Department of Justice announced that it had seized 68 protected lions, tigers, lion-tiger hybrids and a jaguar in Tiger King Park for ongoing endangered species law violations. .

According to Acting Deputy Attorney General Jean E. Williams of the Department of Justice’s Environment and Natural Resources Division, during three inspections of Lowe’s Zoo, Lowe was cited for failing to provide the animals with care adequate or timely veterinarians, proper nutrition and shelter that protects them. weatherproof and is of sufficient size to enable them to adopt normal behavior.

Jeff Lowe and his wife, Lauren, were also found in contempt after months of failing to comply with court orders requiring them to employ a qualified veterinarian and establish and maintain a veterinary care program that meets the requirements of the law. on the protection of animals.

“This seizure should send a clear message that the Justice Department takes the alleged harm to captive-bred animals protected under the Endangered Species Act very seriously,” Williams said.

“We are proud to have partnered with the Environment and Natural Resources Division to protect these incredible animals, and we will ensure that they go to responsible animal reserves where they can be safely cared for instead. that exploited, “added Acting Deputy Attorney General Nicholas L. McQuaid of the Criminal Division of the Department of Justice.

While the first season of “Tiger King” brought Baskin a degree of notoriety that earned her an invitation to appear on the “Dancing With the Stars” television series, she stated that “the outrageous allegations and misinformation about her personal life, “including Joe Exotic’s accusations that Baskin murdered her first husband, millionaire Don Lewis, in 1997, overshadowed his efforts to protect the big cats.

In the Discovery Channel mini-docuseries, Baskin said she was able to focus on the abuse, neglect and over-breeding of big cats.

With the help of homicide detective Griff Garrison, she searches for evidence of animal abuse and illegal wildlife trafficking on the property of Joe Exotic’s former zoo, “revealing many shocking moments along the way.” according to the Discovery Channel press release.

She also enlists Joe Exotic’s niece, Chealsi, who spent much of her childhood working at the zoo and has first-hand knowledge of what went on behind the scenes.

In the docuseries, Chealsi directs Baskin and investigators to areas around the zoo where evidence will most likely be found of animal abuse, including the remains of the tigers Joe Exotic slaughtered.

The documentary also follows Baskin and his team as they set up a week-long aerial surveillance on Lowe’s property, resulting in several tense confrontations between Lowe and his team.

In a 1989 federal case titled “Operation Cobra”, due to Tabraue’s owning an exotic pet store and ranch, Tabraue was convicted of racketeering and drug trafficking along with his co-conspirator, Orlando Cicilia, brother of US Senator Marco Rubio. -in law.

According to federal prosecutors, Tabraue and Cicilia operated businesses trading exotic birds, snakes and other exotic animals that served as fronts for smuggling cocaine from Colombia.

Tabraue was sentenced to 100 years in prison, but was released after 12 years when he became an informant.

Once released, he quickly took over his exotic animal business, importing and raising wildlife under the benign and misleading name of Zoological Wildlife Foundation. The company was originally called Zoological Imports 2000 Inc.

Despite his history of drug trafficking and a string of animal neglect and abuse violations dating back to 2001, and the fact that the United States Department of Agriculture recently charged him with two violations of federal law on animal welfare, Tabraue inexplicably managed to retain his license to import wild animals.

“This is a unique opportunity for the audience to come behind the scenes with us for an unfiltered look at how we expose small animal exploiters and roadside zoos that we believe mistreat animals,” Baskin said of the upcoming Discovery series. “This is our real work with a dangerous world, and viewers will see our people under threat, guns pointed at us and bad guys firing at our drones.”

Brittany Peet, deputy general counsel for the PETA Foundation for Captive Animal Law Enforcement, appeared in the first season of “Tiger King” and was central to the conviction of Joe Exotic.

She said the animal abusers featured in “Tiger King” are slowly but surely getting their desserts.

“It has been a deservedly bad year for the villains of ‘Tiger King’, almost all of whom are now in jail, without cases or facing charges or criminal charges,” she said.

Additionally, she noted that the use of big cats for photo ops declined dramatically after the first season of “Tiger King”.

Baskin also plans to continue pushing for passage of the Big Cat Public Safety Act (HR 1380-S.2561), a federal bill that would prevent people from owning big cats as pets and would prevent roadside zoos from offering petting and photo ops. .

Last year, the bill was passed in the House and read twice in the Senate, but was ultimately referred to the Senate Environment and Public Works Committee for further consideration.