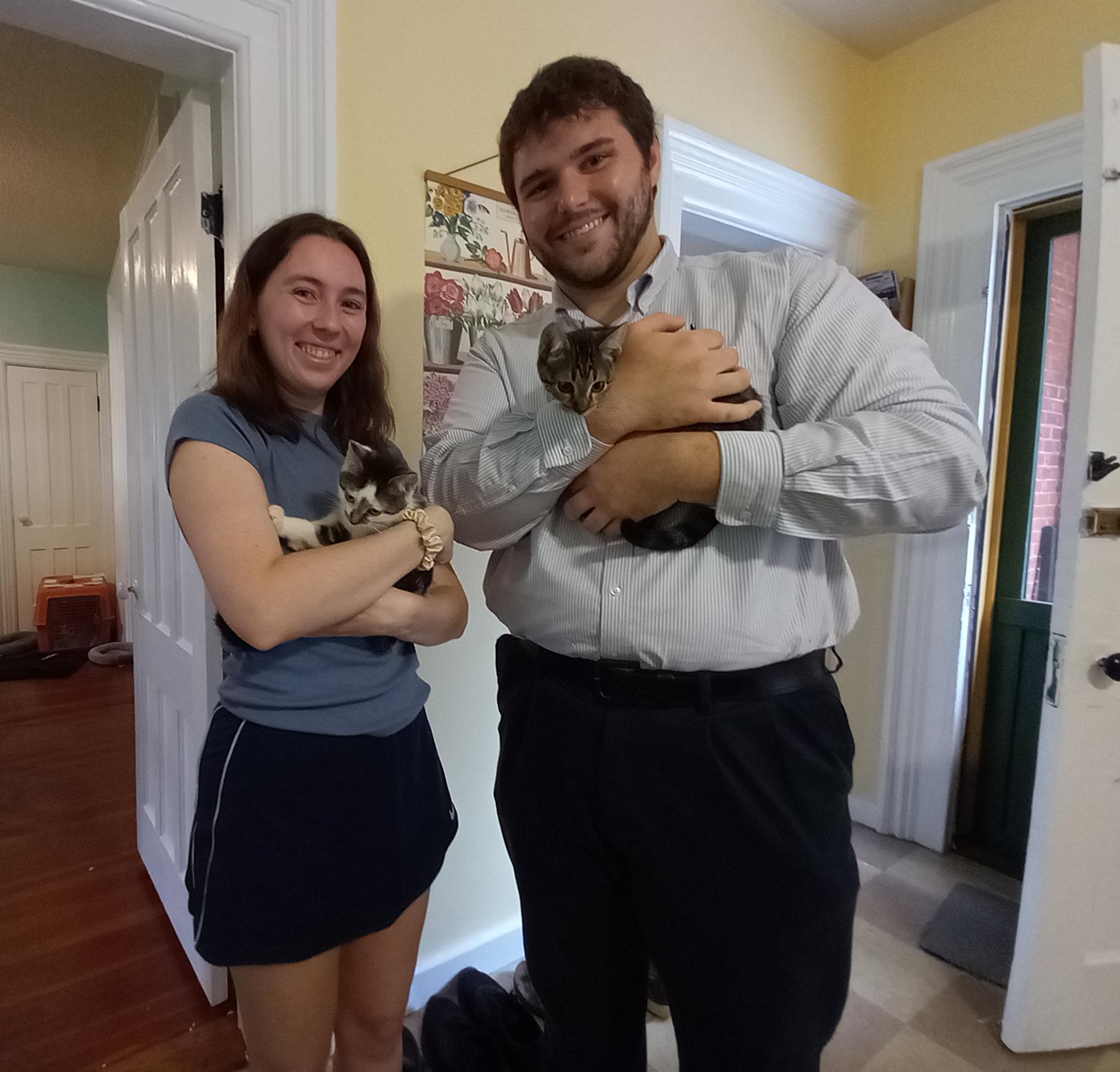 WINSTED — Two of more than 160 cats rescued from a hoarding situation in June have ended up returning home with rescue leader City Manager Josh Kelly.

The two male kittens, Sunny and Roy, are around 10 weeks old and doing well, Kelly’s girlfriend Katie Lipman said. She and Kelly live on Meadow Street, and the four are adjusting to life together inside the house.

“They’re doing great – they had worms, so they’re being treated for that, but it’s almost over,” Lipman said.

Sunny, a white calico mix with flecks of gray, is quite inquisitive and restless, while Roy, a brown tabby cat, is a little more cautious and easily slips away from a friendly hand. The kittens have completely bonded, Kelly said, and play happily together all day.

Toys are strewn on the floor and two tiny litter boxes stand side by side. in another corner, two matching pet bets and blankets are waiting for you.

Their names have a story. Kelly and Lipman wanted to name them Butch Cassidy and the Sundance Kid. “But we didn’t want to call a kitten Butch, so we decided to use Roy, because Butch Cassidy’s real name was Robert Leroy Parker,” Kelly said. “And Sunny, for Sundance.”

“It’s one of our favorite duo movies,” Lipman said. “They’re troublemakers, and they’re in trouble, so it fits.”

The rescue operation continues for the remaining cats; others are being discovered now that the majority of the animals have been removed from the home, along with a ferret and several dogs.

“The cats we find now are the ones that didn’t want to be found when we first walked into the house,” Kelly said. “They’re more anti-social – they’re not used to being around people. So they will probably go to an animal shelter; they are not really ready to be adopted yet.

Meanwhile, other cats are ready to go home with a new family. The city still uses the Batcheller School as a temporary animal shelter, where they can be cared for and cared for while they adjust after being removed from the home.

Twelve animal shelters have taken in numerous cats, and contact information for those groups is available on Kelly’s Facebook page.

“At this point, the best way individuals can help care for these cats is to consider adoption through one of our partner shelters/rescue,” he said.

“We have vet bills to pay, but what we have received will exceed those bills. When we pay what we are responsible for, we will divide the money and donate it to shelters.

Winsted Police say the investigation into the animal hoarding situation is continuing.

Advocates step up focus on eliminating lead exposure in children