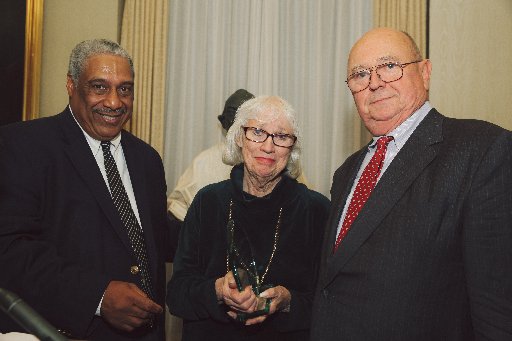 WASHINGTON, DC – At an October 10 ceremony at the Vatican Embassy in Washington, Catholic advocates working to end the death penalty recognized leaders in the fight against capital punishment in the United States

They also pledged to remain engaged in the ongoing work of building the culture of life.

About 200 people attended the event, organized on the occasion of the World Day Against the Death Penalty and sponsored by Catholic Mobilizing Network, a national Catholic organization working for the abolition of the death penalty and the promotion of restorative justice.

The Apostolic Nuncio, Archbishop Christophe Pierre, welcomed the guests to the “pope’s house” and called their gathering because of the pope’s support for their work and his own statements against the death penalty.

The nuncio notably pointed to Pope Francis’ revision of the Catechism of the Catholic Church four years ago to say that capital punishment is “inadmissible because it is an attack on the inviolability and dignity of the person”. .

The Archbishop urged those involved in the work of the Catholic Mobilizing Network not to give up. “Keep going! Be bold!” he told them, emphasizing that “together we can build a culture of life”.

During the event, Catholic Mobilizing Network officials presented Washington Cardinal Wilton D. Gregory with the “Archbishop Fiorenza Dignity & Life Award” for his longstanding commitment to raising awareness of capital punishment as a such a vital problem for American Catholics.

The award is named in memory of Archbishop Joseph A. Fiorenza of Galveston-Houston, a longtime death penalty abolitionist who died in September at age 91.

Gregory said it was an honor to accept the award as he was “privileged to call Bishop Fiorenza a valued friend and mentor.” He said the archbishop spoke out against the death penalty even as the state of Texas, where he ministered, continued to use it.

“If he were with us tonight he would encourage members of the Catholic Mobilizing Network to continue your advocacy to end the death penalty,” the cardinal said.

Grégoire added that he would continue to lend his voice to the chorus of many others, including the pope, to end this practice.

The group also presented Vicki and Syl Schieber, a Catholic couple, with the “Reimagining Justice Award”. The couple’s daughter, Shannon, was murdered in 1998 and they launched a successful campaign against pursuing capital punishment in her case, even though the district attorney had originally wanted to prosecute her.

Since then, the couple have continued to advocate publicly against the death penalty.

Vicki Schieber said she and her husband would not have attended the evening’s event or received the award had it not been for the support many people in the room had given them over the years.

Syl Schieber said he and his wife relied on their faith to support them and respond as they did after their daughter’s death.

He said they had both prayed the Lord’s Prayer “thousands of times” and knew the message to ask for forgiveness required “that we forgive those who trespass against us”, but that’s only when they went through their ordeal that they truly understood what it meant to forgive others.

Syl Schieber joked that American philosopher of baseball fame, Yogi Berra, noted that “when you come to a fork in the road, take it”.

“There were no directional signs at our fork in the road, but our faith pointed us in the right direction even as police and prosecutors pushed us in the other direction,” he said.

He also noted that many people they have met in the same situation “have chosen the other path”, of seeking the death penalty, and have waited decades, or are still waiting, for executions – which harms family relationships and mental health. .

“If we can help survivors in these cases choose the best path when they are at a crossroads, that would be a tremendous tonic for their long-term well-being and an accelerator for further elimination of the death penalty. “said Syl Schieber, adding that he was grateful that God had given him and his wife the “vision to see the best way.”

In her closing remarks, Krisanne Vaillancourt Murphy, executive director of the Catholic Mobilizing Network, noted that the group is “the only national faith-based organization dedicated to the abolition of the death penalty”.

For the past 13 years, she said, her job has been “to delve into the darkest depths of the criminal justice system and proclaim the good news that Jesus came to share – that another way of doing justice is possible”.

For example, she said earlier today that a group of Catholic leaders sent a letter to Oklahoma Governor Kevin Stitt urging him to stop the state’s plan to execute one person a month. for the next two years.

Vaillancourt Murphy said advocates for the abolition of the death penalty should be energized and emboldened in the work they do together and also encouraged by signs of hope, including Virginia’s ban on the death penalty. Last year.