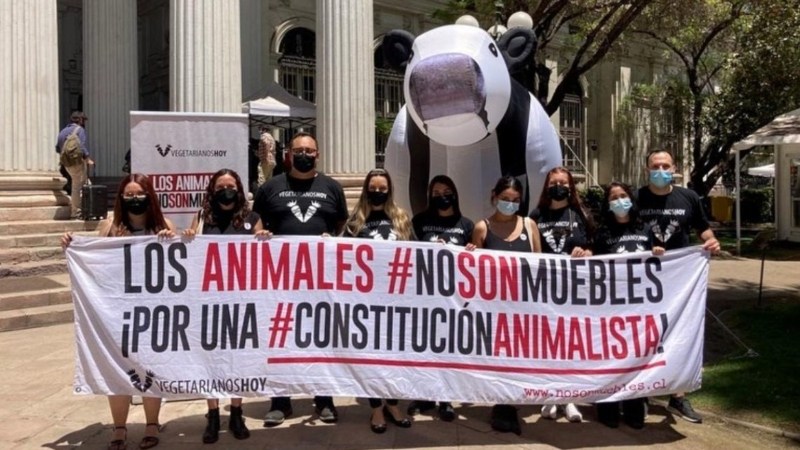 HAVANA TIMES – If approved September 4e, the new constitution could allow a gigantic change in the level of rights in Chile. Likewise, with regard to the approval of new laws and the implementation of future public policies. Perhaps one of the most innovative and revolutionary issues in the draft constitution is what relates to the incorporation of non-human animals into the new fundamental charter.

Thus, recognizing for the first time non-human animals in a constitutional text will not only be unprecedented in Chile, but will also place the country at the forefront of the international field in this matter.

There are about 50 countries that incorporate nonhuman animals into their constitutions and laws. These include the United Kingdom, Germany, France, Switzerland, Portugal, India, New Zealand, Austria, Luxembourg, Colombia, Costa Rica and the European Union, declaring them sentient beings and characterizing animal abuse as a crime. However, the constitutional norm put forward in Chile goes much further.

I point this out because the revision of the constitutional norm, by proposing that animals are subjects of law, may open up a radically different new scenario for nonhuman animals in the near future, as it reads: “Animals do subject to special protection. The state will protect them, recognizing their feelings and the right to live a life free from abuse. The State and its branches will promote an education based on empathy and respect for animals.

In other words, that they cease to be considered as objects, either for their exploitation, their domination or their protection, in the best case. This leaves open the possibility of seeing them as individuals, which can completely change our relationship and our coexistence as humans with the rest of the animals, after several centuries of speciesism in the world, where an extreme ontological and hierarchical division s is built between us and other beings.

For the same reason, to conceive of nonhuman animals as subjects of law, as the 2019 Toulon Declaration also underlined, is to place them in a very different legal status than they have historically been. As the philosopher Jorge Reichmann said, they were treated like beasts, irrational, soulless beings and totally inferior to us.

One could say that a simple legal norm is not capable on its own of confronting a culture of domination of species, millennial, which has placed human beings above other species, and that with modernity and the Capitalist industrialization transformed other animals into mere commodities for human experimentation, production and consumption.

However, other systems of domination of humans against humans (sexism, classism, racism) and humans against nature (anthropocentrism), are still very strong, and that is why we will continue to fight against forms that do not generate discrimination, violence, war and jeopardize the basic conditions for the reproduction of life.

We must never forget the fight that different movements (feminists, Afro-descendants, indigenous peoples, environmentalists, sexual dissidents) have historically waged against injustices that seemed impossible to reverse in many places, but very important advances have been made, regarding rights and recognition.

In view of this, what is happening in Chile is a tremendous step forward, not only for the animal rights movement and for the country, but also for the rest of the world, which should be very grateful for a constituent process of the global South. , which has questions incorporated, which in previous years no one would have thought possible had even been discussed.

This is why it is essential to mention all the animal organizations involved, such as the Lawyers for Animals Foundation, the Vegetarian Today Foundation, the Animal Law and Defense Foundation, among others, and members of the constituent assembly such as Camila Zarate , Barbara Sepulveda, who were instrumental in influencing other voters to get this standard approved in plenary.

In the case of Barbara Sepulveda, the discussion she had to give is quite remarkable, not only with the conservative sectors, which continue to consider rodeo, greyhound racing, sport hunting, as traditional forms and intrinsic to Chilean culture, which should be maintained, but also with other sectors (ecologists and indigenous people), which have not understood to conceive of non-human animals as subjects of law.

Thanks to all this struggle that took place, the Constitutional Convention finally opted for the recognition of non-human animals in the project, as it also did with nature, with indigenous peoples, with women and with other other subjects of law. that the Chilean state has historically denied.

Some, from a discourse of rejection, will say that this norm is maximalist and fundamentalist urban identity groups, who want to impose their centralizing and pro-animal vision on the rest of society, especially on rural sectors. They omit that Chile, although it already has animal protection laws, is highly indebted compared to many countries in the world, which have stopped viewing non-human animals as personal property or things.

Similarly, those who seek to ridicule this norm, saying that if the new constitution is approved, barbecues will be banned, do not understand that what will be sought with the new legislation is to move towards a society that takes in charge of animal mistreatment, both in large cities and in the countryside, through new demands on the production system, as well as through a strong role of educational policies focused on empathy and animal well-being.

To conclude, this recognition of non-human animals in the new constitution of Chile, as subjects of law, is perhaps the first step in redesigning us as animals, mammals and primates, which we have always been, but that certain speeches of being able made us believe that we are not it.