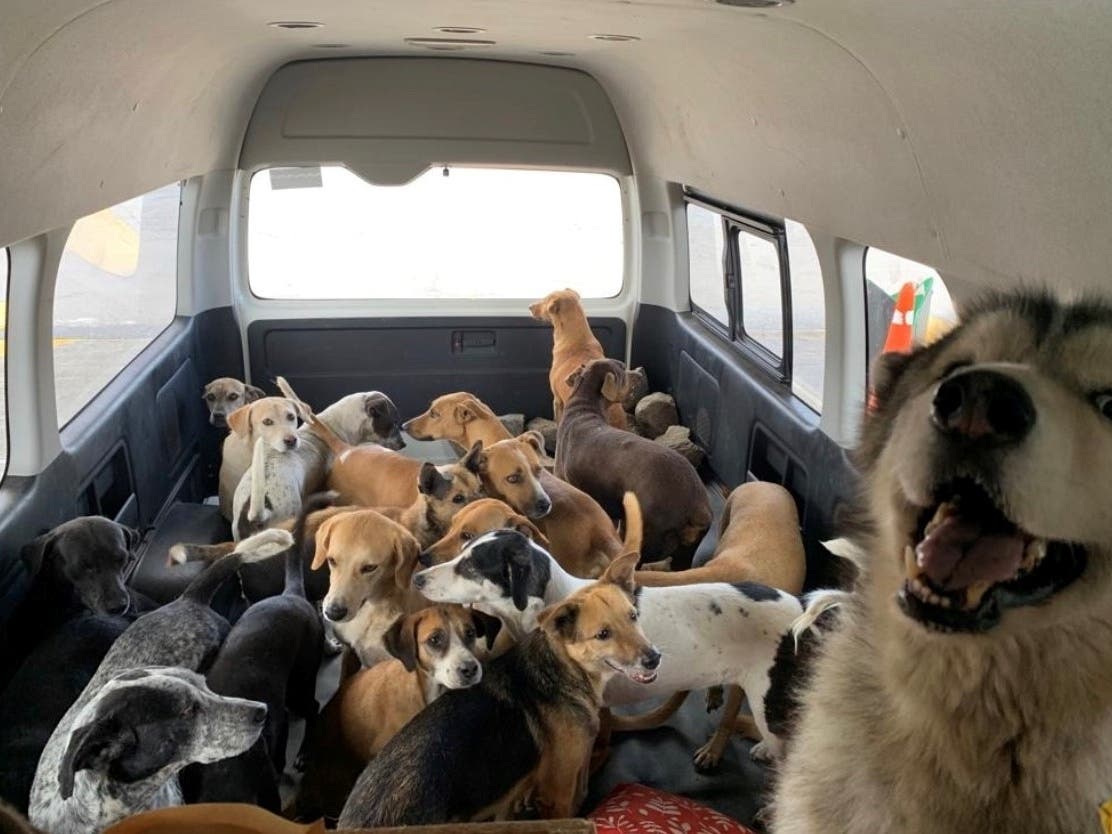 The Southampton Animal Shelter said it took in four of the dogs – two went to Kent Animal Shelter in Calverton and two, to Bideawee in Westhampton Beach – who were rescued from gang and drug cartel violence at an undisclosed location in Mexico.

“In March 2022, SASF was made aware of a chilling situation in Mexico; members of gangs and drug cartels were extorting a dog sanctuary, threatening to kill all 20 dogs there if the sanctuary did not gain access. to their demands for money,” the SASF said. .

Fearing for the lives of the 20 dogs, as well as his own life, the sanctuary director contacted Bonnie Klapper, a former federal prosecutor familiar with the cartels, who then contacted SASF executive director Pat Deshong for help. ‘aid.

Deshong contacted animal welfare groups that have expertise in large-scale transport and assistance to shelters in crisis, the SASF said.

The evacuation was logistically difficult, involving obtaining health certificates for the dogs, renting a cargo plane, obtaining export and import permits and finding a place where dogs can go once in the United States, SASF said.

A rescue group arranged transportation and temporary housing for the dogs — and on March 19, all 20 dogs left Mexico and were airlifted to a facility in Tennessee. Eight dogs arrived at the East End of Long Island, four arrived at the Southampton shelter on Thursday April 7 – Layla, Chaparro, Tito and Abu will soon be available for adoption.

“We couldn’t let these dogs be victims of the brutal drug trade in Mexico,” Deshong said. “They needed to be rescued, and in keeping with our philosophy that every life matters, we didn’t hesitate to help bring them home to the Hamptons. it happens.”

John Di Leonardo, president of Long Island Orchestrating for Nature, said Klapper, who will be inducted as a board member at the next LION meeting, is a former federal prosecutor who has dedicated 25 years to fighting against Colombian, Mexican and Guatemalan drug cartels. She recently contacted Di Leonardo about a dog sanctuary in Mexico that was “extorted by cartel members threatening to kill the sanctuary’s 20 dogs if they weren’t paid. Needless to say, the sanctuary had to close and that the dogs needed urgent evacuation,” Di Leonardo said.

Di Leonardo said he put Klapper in touch with Deshong, and within three days Deshong had organized a rescue and transport with the help of a private foundation, which asked not to be identified, and Animal Rescue Corps .

“The dogs needed health certificates, the flight needed import and export permits and the dogs needed a place to go – so it was a major effort,” he said. . “After numerous last-minute dramas, the cargo plane carrying the 20 dogs departed Cancun airport on March 19. Logistical issues forced the flight to land in Fort Meyers, Florida.”

Shelter staff from a nearby local facility immediately responded, met the plane, removed the dogs and brought them to the shelter for an overnight visit, Di Leondardo said. Early the next morning, the 20 dogs were back on the plane for their flight to a Tennessee kennel run by Animal Rescue Corps.

“The dogs were there for several weeks, receiving proper veterinary care and resting from their ordeal,” he said.

On Friday, eight of the “cartel survivors” arrived on Long Island, he said.

Klapper said she was able to visit the dogs on Monday. “They’re so nice,” she said.

Klapper, who worked in the federal attorney’s office for 25 years, mostly in the Eastern District of Long Island, said she retired about 10 years ago and worked as a criminal defense attorney.

Four years ago, she began slowly closing her law firm and devoting time to animal rights, she said. “Dogs are my particular passion,” Klapper said.

Klapper, who lives in Sag Harbor, said she spoke to a young woman who founded a farm animal sanctuary outside of Cancun. “It’s an amazing place,” Klapper said.

One day, the woman called Klapper asking for help with a small dog shelter. Cancun, Klapper said, has become a “hotly contested cartel zone”, with once-peaceful areas such as Tulum seeing “horrors. This whole area is not safe,” she said.

Crime escalated when drug kingpin Joaquin ‘El Chapo’ Guzman, who was sentenced to life behind bars in 2019, was jailed; his sons, known as “Los Chapitos” or “the little Chapos,” are fighting for control of this area with other cartels and gangs, Klapper said.

“They don’t just distribute drugs and weapons,” Klapper said. “There’s extortion. They say, ‘Pay me money or I’ll burn your business down or I’ll kill your family,'” she said. “It’s one of the techniques of MS-13.”

Some gang members stopped at the dog shelter and threatened the man who ran the establishment. “They said, ‘Either you pay us or we’ll kill your dogs,'” Klapper said.

The woman Klapper knows put her in touch with the founder of the dog sanctuary; she called four rescues, all of whom got the same response, she said, “They said, ‘Sorry, we’re busy; we’re not interested,'” she said.

But all hope was not lost.

Klapper was put in contact with Deshong by Di Leonardo. “Before I could finish explaining myself, she said, ‘We need to get those dogs out. I’ll help you.’ She was amazing.”

Three days later the plans were in place and a charter plane was booked. Still, the details were daunting. “It was quite a logistical nightmare,” Klapper said.

Due to permission issues, the dogs were brought to the airport and then had to be brought back to the sanctuary, she said. “Those poor dogs,” she said.

Eventually, the paperwork issues were resolved and the dogs were able to board the plane and land in Fort Meyers, where Klapper also praised the volunteers who cared for the dogs overnight. The next day, they headed to the facilities in Tennessee, where they were able to rest before their trip to Long Island, Klapper said.

Of the rescue mission, Klapper said: “It was like Hillary Clinton saying, ‘It takes a village.’ It was a village. Passionate rescues were all coming together and doing a miracle. When I looked at these dogs today, I said, “Look at you, you were almost dead in Mexico and now you’re all going to be living in houses on Long Island. What could be better?'”

The dogs, despite what they’ve been through, are still gentle and loving, she said.

For Klapper, the ability to help was deeply rewarding. Throughout her career, she has focused on seeking justice, for the prosecution and for her clients. “Now my real passion is to find justice for animals – and in this case, everyone agreed.”