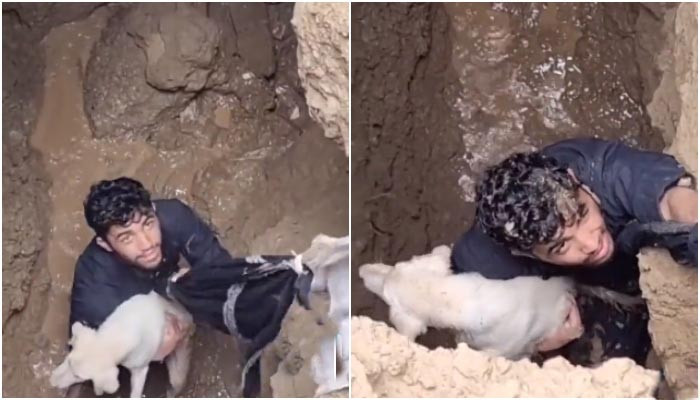 As Pakistan suffers from flash floods caused by rain apart from people, animals were also waiting to be rescued.

In a thread shared on Twitter, heartbreaking and heartwarming videos show animals trapped desperately as people come to their rescue, showing that humanity prevails in these difficult times.

In this video, a man can be seen descending into a chasm to rescue a stray dog. The man comes down with a cloth tied around him and brings the dog with him while others pull him up.

In another video, a man named Ayaz rescued a cat that was stuck in a flooded village in Thatta.

“Ayaz shared that he rescued dogs and cats from flooded villages and then lived with them in the camp,” reads Twitter.

Another video shared by Khyber Pakhtunkhwa Rescue 1122 shows a rescuer rescuing a cat.

The worker saves the cat as he hangs on a rope and goes through a heavy flood, risking his life.

In Charsadda, a dog shelter was submerged due to heavy flooding, killing nearly 40-50 animals.

However, the others were taken to safety and some of them were injured. The dogs were moved to another location on a boat and are being cared for there.

In another video shared on social media, men on a boat could be seen feeding stray dogs stuck on a building.

The video shows a person throwing food to dogs stuck in a building surrounded by floodwater.

EXCLUSIVE: A single mother tries to save an animal farm during drought, excessive heat and record inflation