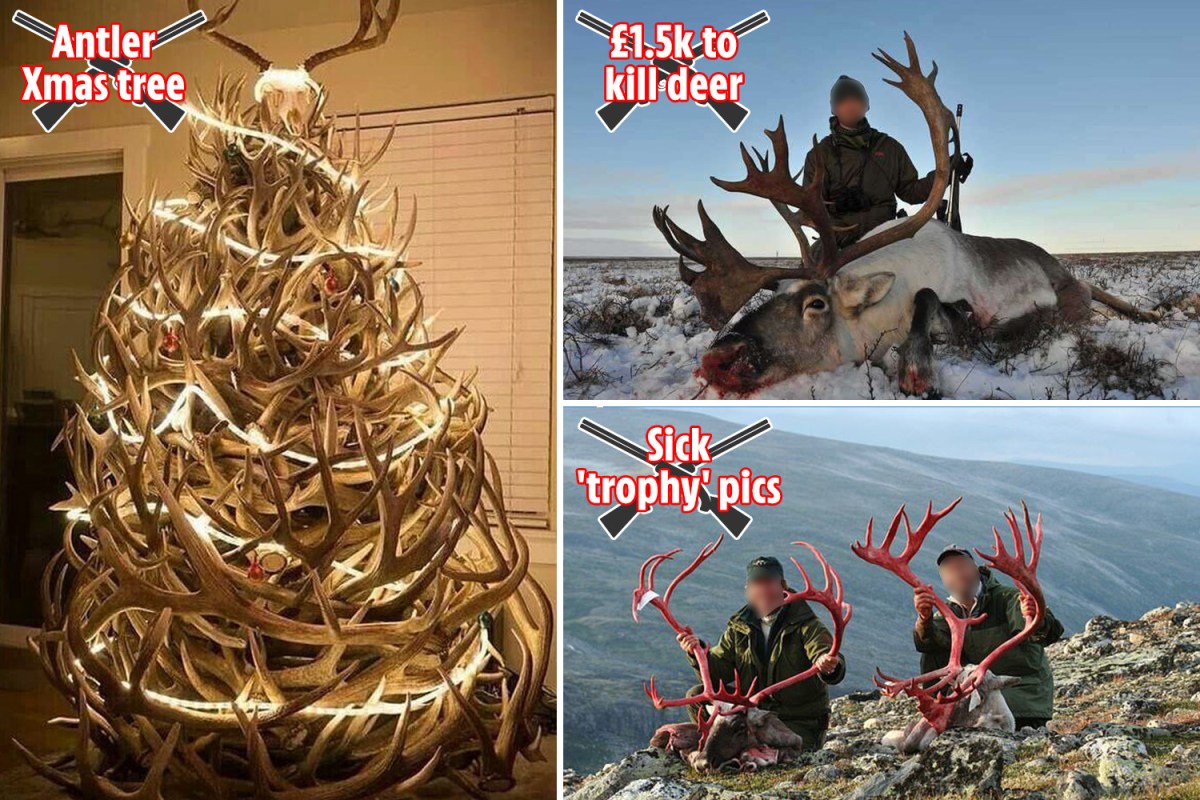 For most of us, reindeer are a symbol of Christmas, with the majestic beasts known to be Santa’s loyal helpers.

But sickeningly, to others, they’re just seen as prized conquests of brutal hunting trips.

Despite being classified as vulnerable, trophy hunters don’t hesitate to pay thousands to hunt down and slaughter reindeer before showing their victims in grisly bloodstained photos.

Here, we take a closer look inside the ghoulish industry.

On a hunting website, seven hunts are advertised, organized by Baikal Royal Safari, with prices starting at £ 1,462 for a seven-day reindeer trip to Lake Baikal in Siberia, Russia.

There you can hunt reindeer as well as a variety of other animals.

In addition to the price of the package, guests also have to pay for additional extras including gun rental, shipping of trophies, £ 90 per day for performer and taxidermist work, or for £ 5,000 , guests can get a discounted package.

For that price, guests are “treated” for a 10-day trip to Russia, currently rated nine out of 10 stars by critics, with one admitting that the excursion is “brutal in nature.”

Another hunt, which would cost hunters £ 6,000, also tracks moose.

As a selling point, the website features grisly images of a hunter posing in the snow with a dead reindeer, whose blood-soaked red nose puts a sick twist on the traditional festive air.

Another image on the company’s Instagram page shows a Christmas tree made up of dozens of slain reindeer antlers, with a skull placed on top.

Baikal Safari says his team are “great patriots of the small country”, enthusiastic in their profession and “the idea of ​​preserving the natural resources of Lake Baikal”.

Their website insists: “Our partners around the world operate according to the same standards and when it comes to big game, hunting is always ethical and sustainable.

It operates in Breheimen and Jotunheimen National Parks which they say are home to the last surviving population of wild reindeer in Europe, hunted there since the Ice Age.

He specifies: “Only a few permits are available for large males, so this hunt is very exclusive and the season very short.

“The landscape is a breathtaking moor framed by mountain peaks reaching 2,500 meters above sea level.”

The reindeer “could disappear”

Speaking to The Sun Online, Eduardo Gonçalves, founder of the Campaign to Ban Trophy Hunting, said: “These sick serial animal killers just ruined Christmas for children around the world.

“What could be more Christmas than a reindeer?” Every mom and dad will tell you that this is one of the things that turns kids on the most this time of year.

“Now instead of thinking of Rudolph and his red nose, the children will think of Rudolph lying dead in the snow.

Instead of thinking of Rudolph and his red nose, children will think of Rudolph lying dead in the snow

Eduardo GonçalvesFounder of the Campaign to Ban Trophy Hunting

“The reindeer can go extinct if things continue as they are. They have already disappeared in parts of Lapland.

“The number of reindeer is declining and scientists say the hunt is at least partly to blame.

“Isn’t there anything these thrill seekers don’t kill for the fun of it?” Is there nothing sacred anymore?

“It is absolutely disgusting that trophy hunter lobby groups like Safari Club International are offering prizes to trophy hunters who shoot reindeer. What in God’s Land makes killing a reindeer for fun worth a price? “

Killing has no place in a civilized society

The Campaign to Ban Trophy Hunting believes that killing an animal for fun is cruel, unnecessary and has no place in civilized society.

The organization calls on governments to ban it, as well as the import and export of hunting trophies, and severe penalties for violators.

Eduardo says: “The government says it is considering banning hunting trophies of certain species. We need a total ban, however, to discourage these people from killing reindeer and other helpless animals.

The Sun Online has contacted Baikal Safari and Hendry, Ramsay and Waters for comment.

Advocates highlight resources for those affected by suicide