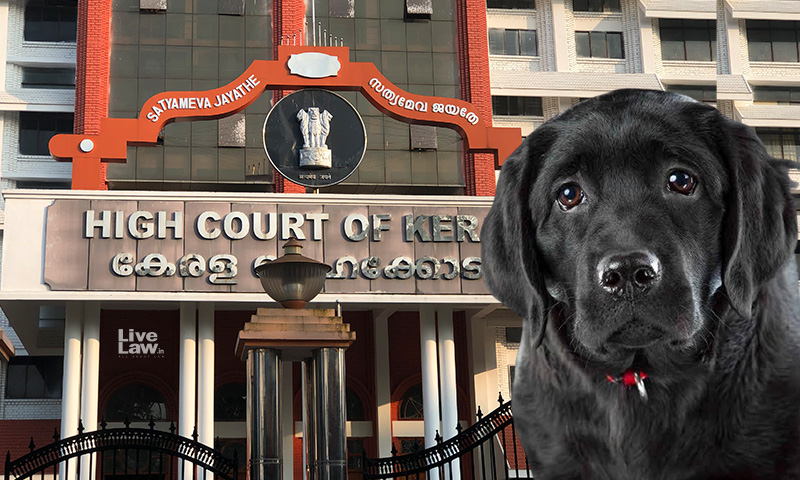 The Kerala High Court on Wednesday issued additional guidelines and suggestions to improve the condition of animal welfare in the state.

A divisional bench of Judge AK Jayasankaran Nambiar and Judge P Gopinath also implicated certain animal welfare organizations such as DAYA and Angels Nair, General Secretary of Animal Legal Force Integration, as additional respondents in the case. The court said this case will be heard every two weeks until the instructions are effectively implemented.

The High Court asked the state government to order local self-government bodies to immediately issue public notices requiring owners of all animals to register animals with them within 6 months. In addition, it was also suggested to make this registration mandatory within 3 months of possession of any animal. The Court recalled that there was previously a licensing regulation similar to this system, but observed that this was not seriously enforced under the Panchayat Rules.

Such a recording would help in many ways, the Chamber observed. For example, many animals are found abandoned across the state. These animals can be taken to a shelter, but their owner should be tracked down and discouraged from keeping other pets. This could also apply to people who injure or maim animals. Registration facilitated this process.

Likewise, the Court recalled that there used to be an aluminum tag for each registered animal. There was even once an initiative to insert microchips for each registered animal to facilitate animal identification. These should be brought back and strictly implemented statewide. The court also suggested that a fee could be levied for the same thing since it was a service. Such measures could also be useful for vaccination and tracing purposes, the court found.

During the procedure, the authorities concerned were asked to implement the applicable rules and to align their actions accordingly, as a great deal of thought was devoted to their elaboration.

As a result, respondents were asked to submit an inventory with details of all state-operated facilities for animal birth control. The first step was to identify the gap between the infrastructure required and the infrastructure provided by the state.

In addition, the Bench Division suggested that the State could rely on private actors to achieve better implementation of the guidelines. There were several private organizations that operated shelters equipped with infrastructure for appropriate medical treatment for animals. These organizations were also very knowledgeable and dedicated to their cause, and the state could benefit if public-private participation was initiated.

As a result, a proposal was put forward by the Court where until the state had its own competent infrastructure to meet the needs of animals, it could participate with private actors and perhaps even fund them to some extent. . An analogy was made with the education sector in this regard.. If private actors were found to comply with the regulations in force, their partial funding and their involvement in the process could greatly contribute to the achievement of our objective., the Court considered

Respondents were also asked to make a list of all competent medical facilities available in the state for animals as well as a list of all qualified veterinarians so that a database could be created. This was to be done immediately after the Council was reconstituted so that the database could be uploaded to their official website and made accessible to citizens.

The Court’s attention was also drawn to a series of posters published by the Department of Animal Welfare at veterinary clinics across the state. the Court considered that these posters’say things an animal welfare organization shouldn’t say ‘. A clause on the poster stated that pets were to be chained or caged at all times and warned of penalties otherwise. Likewise, it is said that stray dogs should not be fed or watered. The court found these clauses disturbing and ordered the respondents to issue a general instruction to remove these posters today itself.

Another aspect that caught the court’s attention was the inaction of law enforcement authorities when animal rights complaints were filed. Lawyer Mr. Uma Devi, representing DAYA, alleged that they did not get the required cooperation from the police and that it was difficult to register a complaint. it was argued that even though a complaint is registered, nothing has been acted upon. The lawyer argued that such inaction could lead offenders to assume that these offenses are trivial and therefore do not deter the public.

To this, the Court replied that there are two aspects to this question; one was animal welfare, while another changed the mindset of citizens. The second step can only be done when people realize that the state is interested in the matter and that it will take time. However, given that this prevailed in the state, the Director General of Prosecutions was asked to give a general direction to the police department and to the state that for every reported incident, an FIR should be filed and appropriate action should be taken. be taken by the authorities.

The case was posted to Monday for further directions.

Earlier this month, he ordered the re-establishment of the State Animal Welfare Board at its previous hearing. Asked about his status today, Additional Advocate General Ashok M Cherian said steps have been taken for the reconstitution and 20 people have been identified as members. He claimed it will take two more weeks for completion.

The division bench stressed that this was an important step and that the other guidelines could only be implemented after this council was formed. Another important aspect taken into account in this regard is that of the composition of the Board. It was observed that there was no statutory regulation on this matter, so the Court asked if there was a criterion adopted for appointing the members of the Council. Such appointments had to be made taking into account the objectives of the Council, which implies that persons willing to fulfill its functions should be appointed.

Lawyer Hariraj appeared in court and argued that he filed an IA registering the earlier constitution of the National Council on Animal Care. For the sake of efficiency, the Court suggested that in the absence of a legal requirement, it was better to keep a smaller committee rather than a huge one to achieve the Council’s objectives. This had to be done as a priority within two weeks.

During this discussion, lawyer Jayasankar on behalf of the Center added that there was a bill pending before Parliament which was pending, about to be passed, which provided for the composition of a National Council for the Protection of Animals. A copy of this has been sent to the authorities concerned so that they can constitute the Council accordingly. It was also pointed out that there were Supreme Court guidelines dealing with the issue of the composition of state councils in the absence of legal requirements. The court ordered the authority to also review these guidelines.

The High Court of Kerala recently registered a suo motu PIL to monitor state action in reported cases of animal cruelty and in the prevention of animal cruelty. As a result, notices were sent to the Center, State and Animal Welfare Council of India respectively.

It comes after Judge Jayasankaran Nambiar sent a letter to CJI urging it to take notice of a report on three minors who committed the inhuman murder of a dog named Bruno on a beach in Thiruvananthapuram. Although a police case was recorded in this case, the letter pointed out that prosecutions in related cases were rarely intentional and expeditious.

The main concern expressed in the letter was that Indian legislation for the protection of animals was based on the principle of the superiority of the human species over all others.

He also insisted that now is the time to push the state and its instruments to take positive action to protect animal rights. He had given details of several cases where the judiciary had upheld such rights for the welfare of animals.

The suo moto procedure was later renamed In Re: Bruno in memory of the unhappy dog â€‹â€‹who succumbed to the inhumane acts of three young people. This interesting development made headlines after the Bench Division ordered the Registry to rename the writ, in addition to making suggestions to promote animal welfare in the state.

The investigation into the case is said to be almost complete and the final report is expected to be submitted shortly to the Magistrate Court.

However, the court was also informed that certain proceedings had been initiated against the owners of the deceased animal (Bruno), possibly with a view to pressuring the owners to escalate the infringement and withdraw the complaint. The Director General of Prosecutions was thus ordered to investigate this development and to inform the Court of the existence of legal proceedings against the owners of the deceased dog and of the nature of these lawsuits.

“He has just disappeared”: the authorities fear that the missing Californian runner is “incapacitated” or is no longer in the search area at all