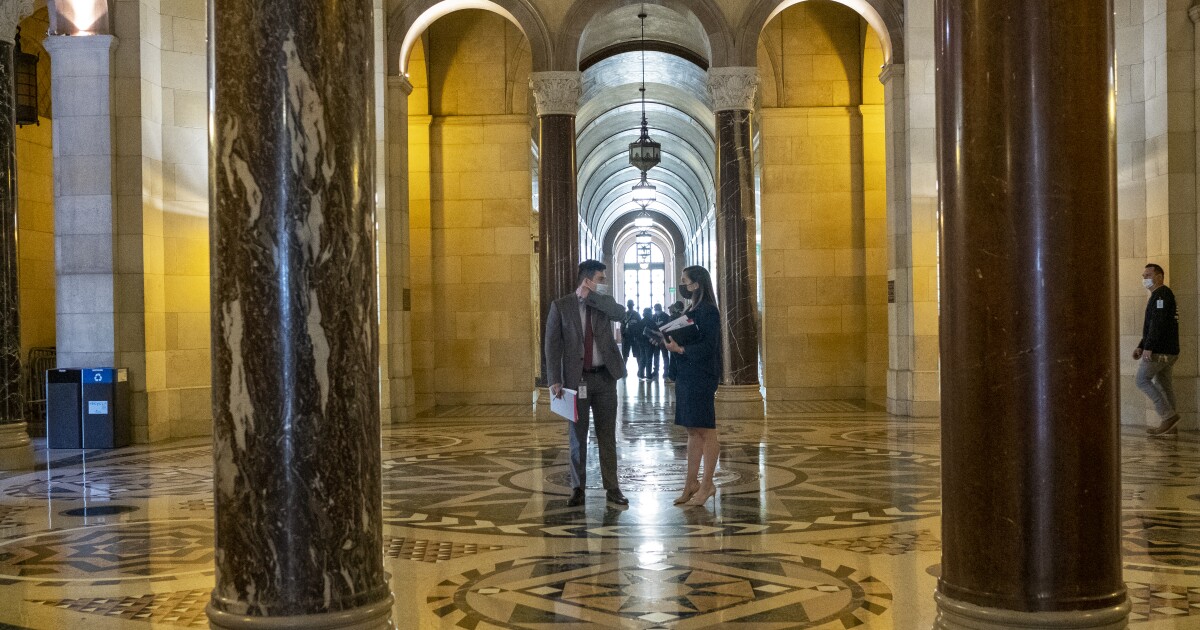 LA on the Record: A slow week in the mayoral race but drama in court

Hello and welcome to LA on the Record – our local election newsletter. It’s Julia Wick, bringing you a shortened summer edition of the newsletter with help from Dakota Smith and Ben Oreskes.

With the campaigns still largely in reset mode and the City Council on recess, it was another relatively quiet week in City Land.

But the long-running drama in the council’s 10th district turned a new page on Tuesday, when a judge temporarily banned Wesson Grass to serve on the Los Angeles City Council.

Wesson – a former board chairman forced out by term limits in 2020 – was named a temporary voting member in February to fill the seat vacated by Mark Ridley-Thomas. Ridley-Thomas was suspended by his colleagues in October, a week after being indicted on federal charges. (Ridley-Thomas has denied the charges and his trial is scheduled for November.)

As my colleague Ben Oreskes reports, the Los Angeles County Superior Court judge’s ruling marked a victory for Ridley-Thomas’ allies, who opposed the nomination and filed a lawsuit.

The plaintiffs in the case, which include the Southern Christian Leadership Conference of Southern California and several council district residents, argue that Wesson is legally barred from returning to the council on an interim basis, since he has already served the maximum number of warrants. under the city’s term limits law. The judge said on Tuesday that they had sufficient probability to prevail in this argument.

So what does all this mean, concretely?

Once again, residents of the district — which stretches from Koreatown to the Crenshaw Corridor in South Los Angeles — do not have a voting representative on the council. The day after the decision, the president of the municipal council Nury Martinez appointed chief of staff to Wesson, Heather Huttas Custodian to manage affairs in the 10th District, but Hutt will not be able to vote with the governing body.

The city and the plaintiffs will appear before the judge again next month.

Meanwhile, columnist Erika D. Smith writes that the struggle for the seat is dividing Black Los Angeles’ political class and hurting residents of the 10th District, who “have lost a desperately needed point of contact on the city council.”

Amanda Bailey stays on the Bass fundraising team, but Shari Yost Gold’s the contract ended after the primary, and she is no longer with the campaign, per Bass spokesperson Zach Seidl. The campaign also plans to hire a full-time communications director after at Anna Bahr leaving last week. Robb will advise on “campaign strategy and communications”.

— VOLUNTEER CONSULTATION: Robb, a longtime ally of the mayor Eric Garcetti who was also formerly its director of communications, told my colleague Dakota Smith that he was not being paid by Bass and compared it to helping a non-profit organization.

“If I could swing a hammer without hurting anyone, I might volunteer for Jimmy Carter and Habitat for Humanity. But what I’m at least half decent about is the campaigns,” Robb said, “so I’m giving back to my city helping Karen Bass win.

When asked if Robb’s pro bono work could give him leverage in a future Bass administration – or create that impression – Seidl called the idea “ridiculous”, saying: “Anyone who knows Yusef know that he is mobilizing for the causes and the candidates in which he believes.

Robb has also worked for free for others who are or were perceived to be aligned with the mayor, including the then-city council candidate. Monica Rodriguez. Robb was one of Garcetti’s many aides who helped her campaign. (Daily Smith is also a Garcetti veteran, having raised money for his two mayoral campaigns. His company worked for former mayoral candidate, Councilman Kevin de León in the 2022 primary.)

— WHAT CARUSO WANTS YOU TO HEAR: For the second consecutive week, the Rick Caruso the campaign sent talking points to supporters to amplify them. In this week’s email, Mary Fontamillas urged supporters to tweet our story about Bass rescinding his endorsement of the candidate for city attorney Faisal Gill and ask why Bass still supports George Gascon and “its soft-on-crime policy.” Fontamillas, who handles communications for Caruso’s company, is also a social media campaign adviser, according to the Caruso spokesperson. Pierre Ragone.

— BOOKS ON THE TRAIL: Accompanied by a large crowd, Bass stopped by Eso Won Books last weekend “to show his support” for the beloved black-owned independent bookstore, which plans to close its physical store in Leimert Park more late this year. She left with books for her grandchildren.

And in the off-campaign news…

— MORE ANIMAL SHELTER BENEFITS: Following Dakota’s investigation last week into the overcrowding crisis at Los Angeles animal shelters, a Los Angeles City Council committee hearing on Tuesday brought new details and allegations about dogs, cats, rabbits and other animals in the shelters of the city. More than 50 people spoke at Tuesday’s hearing; 140 others had registered but could not speak for lack of time.

— HISTORY MADE: Nearly a century after the beachfront property was wrongfully seized from its black owners, Los Angeles County has completed the historic return of Bruce’s Beach land to its rightful heirs, the Bruce family. (For more on the saga, here’s a full rundown of The Times’ coverage of Bruce’s Beach.)

— IT’S TIME TO REMASK? With COVID-19 cases on the rise, an indoor mask mandate could return to LA County within a week.

Do you like this newsletter? Consider subscribing to the Los Angeles Times

Your support helps us deliver the news that matters most. Become a subscriber.

(If you have a recommendation you want to flag for next week, please send it to us.)

It’s all for this week ! Send your questions, comments and gossip to [email protected] Did a friend forward this email to you? Sign up here to receive it in your inbox every Saturday morning.