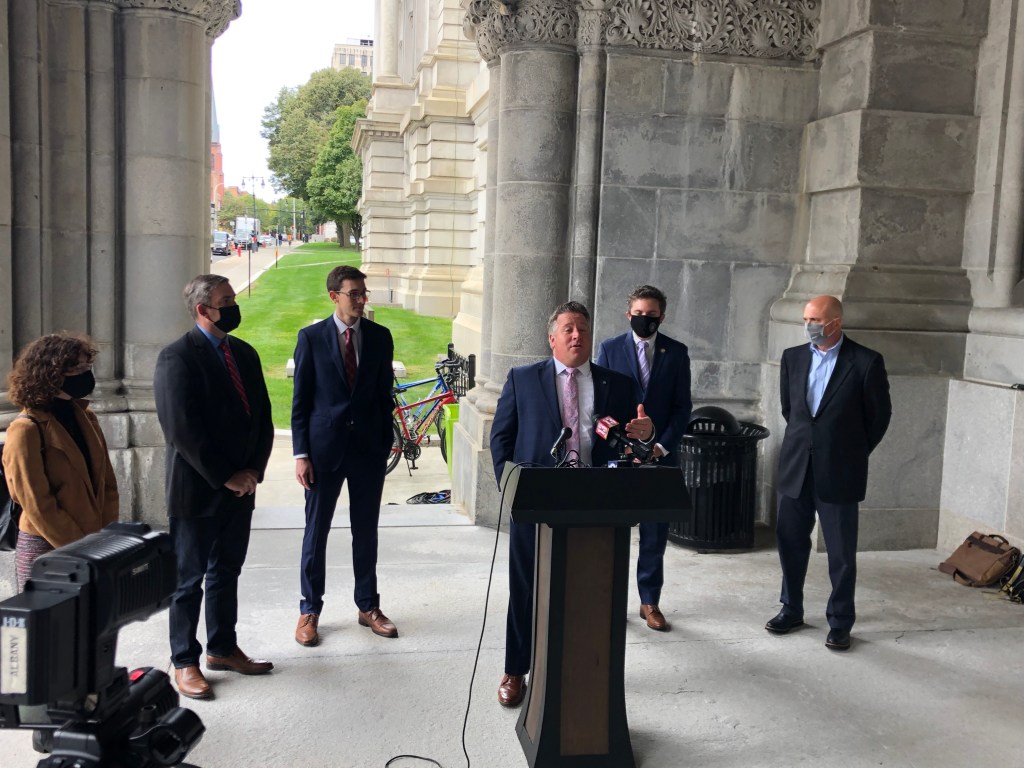 Sponsored by State Senator James Skoufis and Chairman of the Assembly Health Committee Richard Gottfried, this bill puts an end to the uncertainty of millions of New Yorkers who do not know if their water is potable by requiring statewide testing for 40 emerging toxic contaminants. The bill applies to all water utilities, including those that have never tested for emerging contaminants before due to their small service areas (serving about 2.5 million New Yorkers in total) .

This September marked the fifth anniversary of the NYS Legislature’s “Water Quality and Contamination Hearing” in response to the water crises in Hoosick Falls and beyond. Following that hearing, New York enacted the Emerging Contaminant Monitoring Act (ECMA) in 2017, to ensure that New Yorkers would not be left in the dark if their water was polluted. Four years later, however, the NYS Department of Health (DOH) still has not released a list of emerging contaminants for each water utility to test and educate the public, as required by law.

This bill will finally create that list, start testing, and let New Yorkers know what’s in their water.

In recent years, contamination events across New York State have revealed the need for comprehensive testing of drinking water statewide. Carcinogenic PFAS chemicals, for example, have been detected at dangerous levels in Newburgh, Petersburgh, Rockland County, Poestenkill and dozens of communities on Long Island. In response, this bill will establish the country’s most rigorous monitoring program for toxic PFAS chemicals.

The bill’s proactive approach to ensuring safe drinking water has garnered broad bipartisan support in the state legislature. In June, the state Senate passed Bill 54-9 and the Assembly approved it by a vote of 127-20.

â€œCommunities in New York have waited four long years to find out what’s in their water. Now Governor Hochul has the chance to work things out. Extending drinking water testing will protect public health and ensure New Yorkers feel safe when they turn on the tap. We urge Governor Hochul to listen to the communities that have been affected by PFAS and other toxic chemicals and to sign this bill as soon as possible, â€said Rob Hayes, director of Clean Water at Environmental Advocates NY.

â€œFor decades, residents of this state have suffered from hidden sources of contamination, including many of my constituents in the Hudson Valley. New York can no longer afford to drag its feet on the health and safety of its families: we must stay ahead of the curve in terms of identifying, monitoring and eliminating new contaminants from drinking water by strengthening testing requirements for water systems statewide, â€Skoufis noted.

“I am proud to have helped bring this legislation to the finish line and urge Governor Hochul to do good for the people of New York by signing this bill,” Skoufis added.

â€œNew York should be a clean water leader,â€ Gottfried said.

â€œWe need to have the utmost commitment to identifying hazardous chemicals and implementing testing and corrective action when necessary, including monitoring emerging science on these risks. In 2017, the legislature and governor agreed that the Department of Health should establish a watchlist for emerging contaminants. Four years later, we don’t have any anymore. It is time to adopt such a list as the first step towards establishing scientifically appropriate levels for public notification and remediation of hazardous chemicals, â€Gottfried added.

â€œNo one should ever have to worry about whether their drinking water is safe or not, but as we’ve seen in Flint, Michigan, Hoosick Falls and countless other places, what we don’t know not can hurt us. Clean water is a basic human right, but unfortunately it is often the poorest and most disadvantaged communities that are left behind and left in the dark, â€said Daniel McCoy, Albany County Director.

â€œIt’s time we change that by closing a dangerous loophole and ensuring that all public water systems are monitored for toxic chemicals. I commend the state legislature and our conservationists for pushing this bill through, â€added McCoy.

â€œClean water is not a political issue, it is a basic human right,â€ explained Eric Wohlleber, Poestenkill city councilor and deputy overseer.

â€œUnfortunately, my community of Poestenkill has become the last to discover contamination in our water, and unfortunately we know that our city will not be the last. New York State must be a national leader in ensuring safe drinking water for its citizens. I urge Governor Hochul to enact this legislation. With his leadership and vision, we can lay the foundation not only for safe water, but also for the health of millions of New Yorkers, â€added Wohlleber.

â€œThrough testing, we’ve learned that there is much, much more than the only two PFASs in our water that NYS has regulated. Not just in our water, but in the bodies of our children and families. As we at Hoosick Falls near the end of the long process of establishing new drinking water wells for our community, statewide testing for these additional contaminants, many of which share the same effects. toxic to health than PFOA and PFOS, will ensure we have a photo before a shovel hits the ground. A further delay in signing this bill could also terribly delay this process, but avoidable if the governor signs this bill quickly, â€said Loreen Hacket, co-chair of the Hoosick Falls Community Engagement Task Force.

â€œNo New Yorker should have contaminated drinking water. Testing is the first step to detecting potentially harmful contaminants in our drinking water so that they can be monitored and corrected. We commend Senator Skoufis and Assembly Member Gottfried for sponsoring this legislation and urge Governor Hochul to once again fulfill his commitment to protect public health by signing this legislation and adopting the PFAS surveillance program. most comprehensive in the United States, â€Stephen Acquario, director The director of the NYS Association of Counties, commented.

â€œClean water is essential for the health, safety and well-being of our children,â€ said Dana Platin, president of the NYS Parent Teacher Association.

“We applaud Senator Skoufis and Assembly Member Gottfried for standing up for children’s health, and urge Governor Hochul to act quickly to ensure this important and necessary bill becomes law,” Platin added.

“The first step in protecting public health is transparency about what is in our drinking water, and this bill will bring New York closer to fulfilling DOH’s long-awaited mandate under the Emerging Contaminants Monitoring Act.” . Testing for emerging contaminants makes it possible to discover and treat potential contamination earlier, reducing the harmful effects on our communities. The sooner Governor Hochul enacts this law, the sooner the health of New Yorkers can be protected, â€added Victoria Leung, lawyer for Riverkeeper, Inc.