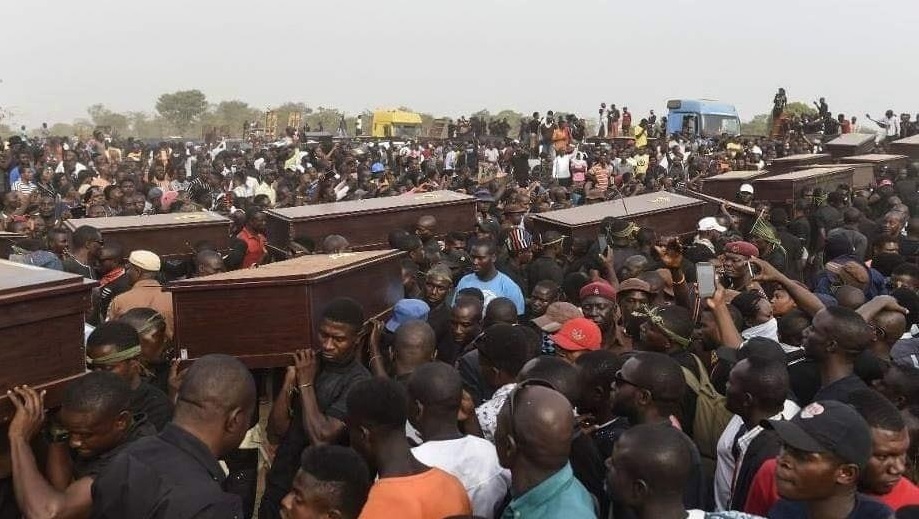 The US State Department says it has raised concerns about religious freedom conditions in Nigeria, even as advocates accuse the Biden administration of pushing a ‘political narrative’ as the African country of the West faces growing extremist and communal violence.

The State Department released its annual International Religious Freedom Report on Thursday, which Secretary of State Antony Blinken described as a “thorough and evidence-based examination of the state of religious freedom in nearly 200 countries and territories to worldwide”.

Blinken removed Nigeria from the list last November, just under a year after then-Secretary of State Mike Pompeo added the West African nation to the list in December 2020. According to the supporters, Nigeria was the first secular democracy to be added to the CPC list. , which includes the possibility of sanctions.

The new State Department report cites testimonies from “civil society organizations and the media”, which “said that insecurity was pervasive across the country and increasing across the country, particularly in the region of the North-West”. As stated in the report, “Islam is the dominant religion in the North West region”.

“There was pervasive violence involving mainly Muslim herders and farmers who were mostly Christian, but also Muslim, especially in the north-central, but also in the north-western areas (where most of the farmers were Muslim) and south-west,” the report added. “According to the Nigeria Security Tracker run by the Council on Foreign Relations, there were an estimated 10,399 deaths from violent conflict during the year, compared to 9,694 in 2020.”

The Council on Foreign Relations estimated that 1,112 deaths “resulted from violence between ethnic groups, herders and farmers, some of which had implications for religion and religious freedom, according to several observers or, in the words of the council, “acquire sometimes religious ties. harmonics.'”

In the heavily Christian southwestern part of Nigeria, local media and officials have determined that criminal attacks initially attributed to members of the predominantly Muslim Fulani ethnic group were instead perpetrated by “ethnic-diverse armed criminal groups”.

Previous Christian Post articles on killings of Christians were cited in the report, including a June 2 article on the death of a Nigerian Christian pastor and his 3-year-old son at the hands of Fulani radicals and a June 24 article. May on arson. of a church building by “bandits” who also shot dead eight Christians.

According to the report, Blinken “raised religious freedom issues with government officials during a visit in November, as did embassy and consulate general officials throughout the year.”

Among other officials, Blinken and US diplomats met with President Muhammadu Buhari and Vice President Yemi Osinbajo.

Stephen Enada, president and founder of the International Committee on Nigeria, told the Christian Post in an email that “Blinken has failed to provide the leadership needed to stabilize Nigeria’s religious fault lines by removing Nigeria from designation. CPC”.

Enada, a Nigerian Christian who fled to the United States several years ago after the death of his cousin, warned that violence was happening in several parts of the country, including the rise of terrorist groups like Boko Haram and the province of the Islamic State of West Africa in the northeast, affects millions of people.

He said “religiously motivated killings continue and millions are displaced, and teenage girls are sold into sex slaves by religious extremists.”

“The problem of terrorism and other militant activities that have engulfed Nigeria over the past 10 years is a result of state failure and lack of accountability,” he explained.

While Enada suggests the Nigerian government could do more to protect religious freedom, he praised the Nigerian Constitution for “lack of a state religion” and grants the right to practice any “religion or faith chosen without any force or coercion”.

Nina Shea, director of the Center for Religious Liberty at the Hudson Institute, told CP in an email that “the State Department has failed to consider the big picture of vulnerable Christian minorities in the north of Nigeria who are repeatedly attacked and driven from their villages by Muslim extremists and their agents”. who act with impunity.”

“Authorities are failing to investigate and prosecute the perpetrators of these large-scale atrocities, and further pursue and threaten local journalists who report them,” she said.

“There is an incomprehensible discrepancy between State Department reports and what desperate Christians on the ground are reporting to religious liberty advocates here. This discrepancy reflects the state’s overreliance on sources that he is [United States Agency for International Development] funds, which in turn push a state-privileged political narrative. This narrative says that violence in the North is driven by conflict over resource scarcity due to climate change. »

Sam Brownback, who served as Goodwill Ambassador for International Religious Freedom in the Trump administration and former governor of Kansas, was one of the first religious liberty advocates to condemn Nigeria’s removal from the CPC list. last fall.

“Nigeria’s sudden removal from the CCP list is a serious blow to religious freedom in Nigeria and across the region,” he said. “Just when we should be doing everything we can to stop the relentless violence that targets Christians and others, we are doing the opposite.”

“This rewards the Nigerian government for tolerating serious violations of religious freedom and sends a message to extremists that their actions will go unpunished,” he added. “Believers in Nigeria will suffer the fallout from this decision, and that is unacceptable.”

The US Commission on International Religious Freedom, a bipartisan group charged with advising the State Department and Congress on religious liberty issues, criticized Nigeria’s removal from the CPC list.

“USCIRF is particularly unhappy with Nigeria’s removal of its CPC designation, where it was rightly placed [in 2020]“, said at the time the president of the USCIRF, Nadine Maenza.

The State Department report praised the Nigerian government for its response to religious violence in the country.

“President Buhari and Vice President Osinbajo have consistently condemned attacks on places of worship and those that attempt to exploit religious differences,” the report said. “Buhari regularly consulted with key Muslim and Christian leaders and celebrated official Christian and Muslim holidays.”

The report pointed to a Feb. 15 statement by Buhari calling on religious leaders and government officials to “join the federal government in ensuring that communities within their domain are not splintered along ethnic and other overriding lines” as evidence. government support for religions. freedom. Moreover, Buhari pledged that his “government will protect all religious groups, whether majority or minority, in accordance with its responsibility under the constitution.”

The report also commented on Nigeria’s removal from the CPC’s list, saying Blinken “determined that Nigeria does not meet the criteria” to remain on the list or even be added to the department’s “special watch list.” ‘State.

Ryan Foley is a reporter for The Christian Post. He can be contacted at: [email protected]