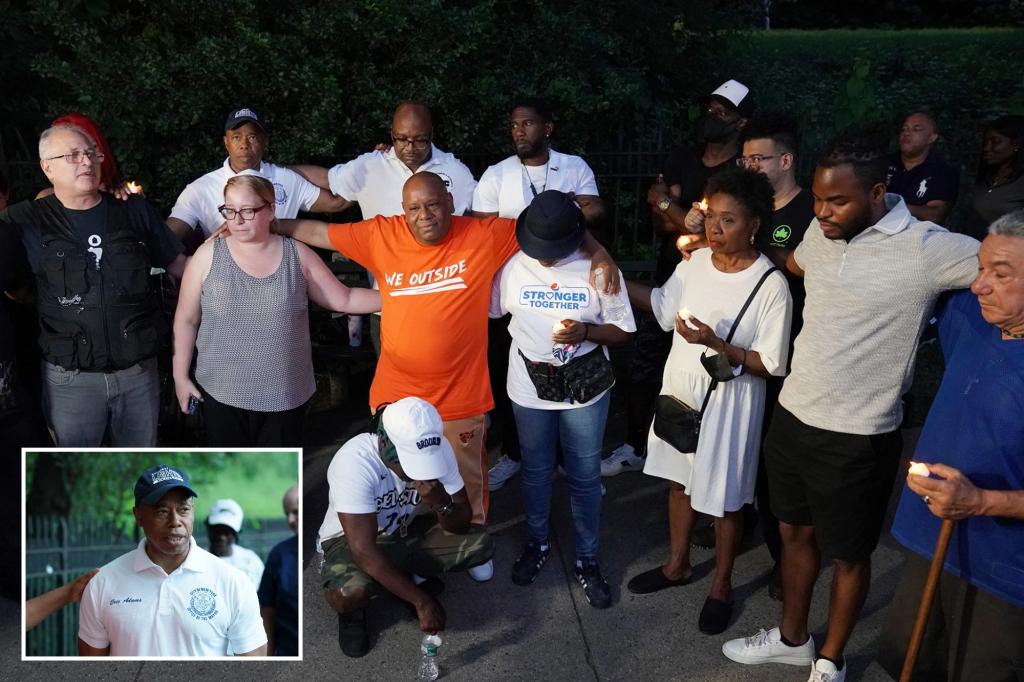 Mayor Eric Adams sat on a park bench alongside homeless advocates during a ‘slumber’ in Manhattan’s Morningside Park on Saturday night amid a wide-spread homelessness crisis from the city.

The mayor joined homeless lawyer Shams DaBaron, also known as the Homeless Hero, on the bench where DaBaron had slept regularly while homeless.

About a dozen other defenders were in the crowd, some with lawn chairs ready to spend the night.

“I come to this bench almost every week,” said DaBaron, who said his “greatest fear” at this point in his life was “to die on this bench.”

“We’re here in real time saying we’re not going to let decades, centuries…of failed policies keep us in this condition,” he continued. “We don’t build slums. We don’t do camps. We don’t ride the subway. We don’t do that.

He said Adams inherited the problem but pledged to hold him accountable.

As the homeless hero eulogized the mayor, a woman in the crowd shouted, “We don’t want Safe Haven!” We want permanent housing!

“I can’t find accommodation. There is no way to enter these accommodations,” added the woman, who lives in a shelter. She was then escorted out.

“If our black and brown students are out of school, where do you think they will be? They will be homeless and they will turn to guns. The cycle goes on and on and on,’ she said as the mayor sat on the bench in silence.

“The only thing I’m not afraid of is being among the people because I am the people. I’m used to all the energy that comes from everyone…all day, every day,” Adams said, briefly noting after the crowd criticism.

“I came here for a reason, to support Shams. Period. End of statement,” the mayor told the gathered press.

Adams said earlier this month that the city’s homeless shelters were overrun with migrant asylum seekers, with nearly 3,000 arriving in recent weeks.

The mayor pleaded with President Joe Biden to send “additional federal resources immediately” so the city can handle the overflow.

Mount Kilimanjaro summit volunteers for the benefit of the SPCA

Establishment of an urban animal sanctuary in Guindy National Park