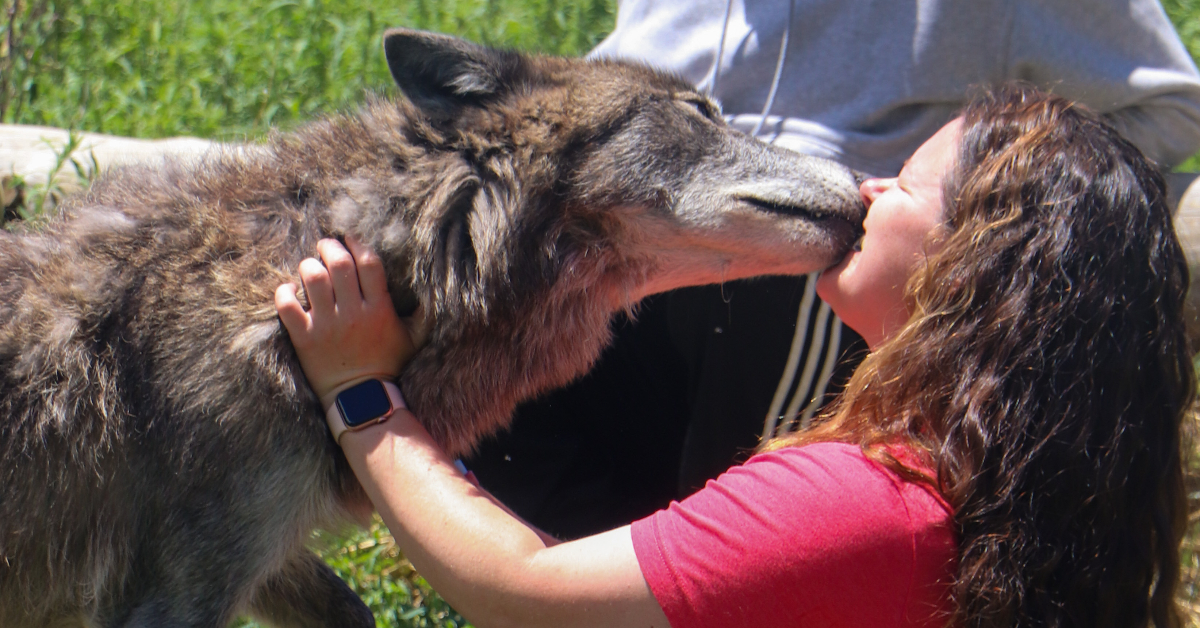 Alaina Fordice met someone this summer that she will never forget.

While working for an adventure-based travel camp and services for teens called The Road Less Traveled, the Vicksburg native had the opportunity to be part of Mission: Wolf, a solar-powered nature center that provides sanctuary to unwanted captive-born wolves and horses. .

Located about 30 minutes from Westcliffe, Colorado, Fordice said wolves are brought to the preserve for a variety of reasons.

“Some come from people who thought it would be cool to own a wolf but didn’t know what it would take (to take care of it),” she said, while others come after the animal can no longer be accommodated due to closures of zoos or other wildlife centers.

Then there are the wolves, she said, who come from Hollywood after they’re no longer needed for productions.

Among those at Wolf Mission are Zeab and Farrah, Fordice said, who were bred for “Twilight,” the 2008 American romantic fantasy film.

“When production decided they didn’t need their litter box anymore, that’s when they came to the stash,” she said, adding that for those who are fans from “Twilight,” it may be worth noting that Zeab and Farrah’s uncle was Sam’s wolf form.

In addition to Zeab and Farrah being movie stars, the couple are also what Fordice called “ambassadors.”

“They (the ambassadors) are used for education,” she said. “The public is welcome at Mission: Wolf on Tuesdays and Saturdays where they can come and visit the sanctuary, learn about the wolves and meet the ambassadors.

“And if you are a group staying at Mission: Wolf doing service like our group was, you have the opportunity to greet the Ambassadors almost every day,” she added.

Mission: Wolf is an all-volunteer reserve, Fordice said, where some staff members are long-term volunteers who may stay for a few months or years and are offered housing and food for their time and energy. Others, like Fordice and his campers, come for a few days or weeks to help.

At Mission: Wolf, Fordice said his job, with the teenagers at travel camp, was to help with whatever project was most needed at the time.

“A lot of the projects we worked on were things that would be difficult for the staff alone to solve because of the number of people and the time it would take to complete them, but if you add another 15 or 20 hands it could be finished in a few days,” she said.

When Mission: Wolf opened in 1988, Fordice said, wolves lived in packs of five to six, but now they live in pairs on at least half an acre per wolf on 50 acres of enclosed grounds.

Recounting the day-to-day operations at Mission: Wolf, Fordice said, “On a normal day, the wolves get their daily food in the morning, which is about 1-3 pounds of meat. On Sundays and Wednesdays, the wolves receive their “big food”, which is between 5 and 10 pounds of meat.

The meat for the wolves comes from supporters who donate their deceased livestock, which in essence, she said, contributes to the “circle of life”.

Wolves, says Fordice, are not dangerous.

“At least no more than any other wild animal,” she said. They have a natural aggressiveness though, she said. “And by nature they are curious but shy.”

Fordice said that of the 25 wolves on site at Mission: Wolf, only about 5 to 10 are social.

“Others have enclosures away from humans so they can live in peace with minimal cause for fear,” she said.

While on Mission: Wolf, Fordice said one of her favorite parts of the day was when she fell asleep and woke up to a chorus of screams.

Another favorite, she said, was being around animals.

“At Mission: Wolf, I was constantly surrounded by these beautiful creatures and had the opportunity to be so close to them and even form relationships with some of them. And the best feeling, very selfish , it was when the wolves came to say hello to me more than the others as the summer progressed,” she said.

One of the wolf ambassadors even stole Fordice’s heart.

“Ydun won my heart early on and I was always happy to see her and receive wolf kisses every day,” Fordice said. “As someone who has never liked dogs licking my face, it was very difficult at first to accept and let a wolf lick my teeth, but after the first day I was looking forward to ‘to go back there.”

Wolves, says Fordice, greet each other by sniffing and licking their teeth. “So that’s how they greet us too; it’s their handshake.

Fordice said she hopes to one day return to Mission: Wolf, where she can reunite with the “majestic creatures.”

Mission: Wolf receives more than 100 requests for wolf care every year, but unfortunately, Fordice said, the sanctuary has to turn down nearly half of the requests simply because they don’t have enough space.

Although Mission: Wolf is a unique place that puts the welfare of wolves above all else, Fordice said, their goal is to one day be obsolete.

“They hope to educate enough people to see the number of captive wolves drop dramatically and the number of wild wolves increase as fears are countered,” she said.

Mission: Wolf was founded by Kent Weber, after he “saw a wolf in a cage and felt disgusted by it,” Fordice said.

Since then, Mission: Wolf has provided lifelong care to 125 wolves and 25 horses, facilitated experiential wolf education to over one million people, and preserved 350 acres of pristine subalpine habitat.

Opinion: A college student learns the value — and joy — of fostering an orphaned pet