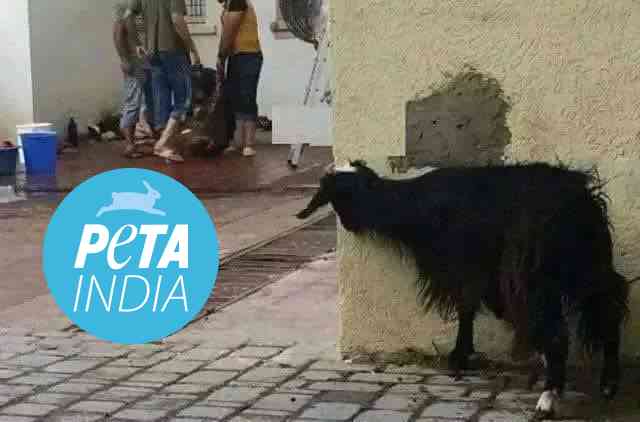 PETA India, India’s ‘animal rights organization’, has decided not to antagonize the Muslim community in India ahead of Bakri Eid, where goats and other animals are sacrificed and eaten during Of the party. In fact, PETA India didn’t even call for a “painless slaughter” of animals for Bakri Eid.

Instead, he simply passed out gyaan in a general direction stating that “all religions call for compassion.”

PETA India has not called on the Muslim community not to slaughter animals in the name of religion. Recently, there have been incidents of violence by Islamist mobs in India where calls for beheading have been made following allegations of blasphemy for allegedly derogatory remarks about the Prophet Muhammad. Bakri Eid or Eid Al Adha is celebrated for the willingness of Abraham (Ibrahim) to sacrifice his son, Ismael (Ismail) for Allah. The Bakri Eid tradition is to slaughter an animal, especially a lamb, according to the halal procedure prescribed in the Islamic scriptures and to divide the meat into three parts, one for the family, one for the relatives and one for the poor so that all Muslims can eat meat.

However, PETA India, which regularly organizes protests and starts petitions asking people to go vegan and not kill animals for food, as it amounts to cruelty, did not appeal to the Muslim population. of 20 crore from India so that it does not kill goats and other animals.

The halal “animal slaughter” system, also known as Zahiba, places special emphasis on the “bleeding” of animals. This is partly due to the Islamic belief that blood is “impure”. The blood drainage of slaughtered animals is the essential basis of halal slaughter. Several Koranic verses remind us that the consumption of blood must be avoided at all costs.

According to Islamic law (Sharia), the “halal” slaughter of an animal requires the use of a sharp knife, free of nicks and scratches. Although there is no directive to use a special type of knife unlike kosher, it is recommended that the knife blade be 2-4 times larger than the animal’s neck. The animal must be well fed, watered and soothed before rendering it inanimate.

Halal slaughter should only be performed by a sane Muslim adult familiar with Islamic rituals. “Animals slaughtered by a non-Muslim will not be halal. The name of Allah must be invoked (mentioned) at the time of slaughter by saying: Bismillah Allahu Akbar“, said the Halal Certification Department of the European Union. According to halal procedure, the animal should be rested on its left side to maximize blood loss. It must also face the direction of Mecca (Qiblah).

Contrary to the above wish which does not urge the Muslim community not to slaughter an animal until it bleeds painfully, PETA India has regularly indulged in shameful Hindu festivals and the way they are celebrated .

This #holi, be compassionate towards animals. Please DO NOT throw colors on it.

In March 2020, PETA India urged everyone not to throw colors at animals, and rightly so. You have to be compassionate towards animals and not hurt them. In 2019, PETA India asked those who celebrate Holi, i.e. Hindus, to go vegan and drink vegan thandai, a milk-based drink. They have made similar calls over the years. However, there were no calls for sympathy for the Eid massacre, nor urged the Muslim community to go vegan.

A similar “compassion” was also shown during Diwali.

Surely, getting slaughtered and bleeding to death would be more terrifying to animals than firecrackers. I wonder what could be an animal-friendly Bakri Eid.

Amusingly, in 2020 PETA India published guidelines on how to slaughter animals “kindly”. Note that on other days, including Hindu festivals, PETA India has urged everyone to go vegan, i.e. give up dairy as well. Over the years PETA India has been criticized for their double standards and hypocrisy about their stance on animal cruelty, but that hasn’t stopped them from choosing ‘peace’ for Eid, probably because everyone is afraid to upset the community where people call for beheading. on ‘hurting religious feelings’