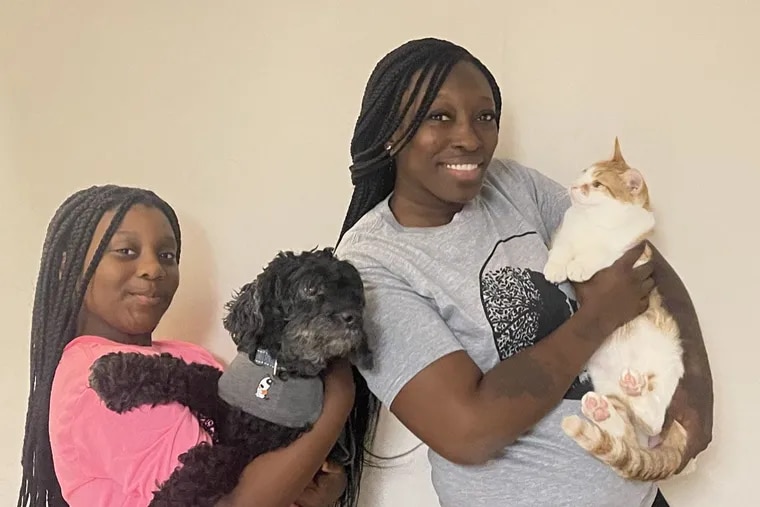 Carina Cheatham hasn’t met many people in the animal welfare field like her, but that has never stopped her from helping a creature in need. This is where Ava comes in.

Last December, Cheatham’s social media lit up for days about a stray dog ​​walking up and down Cottman Avenue. So, with a winter storm brewing, she and her 9-year-old daughter Arianna hit the road. They found the frightened pup, got her in their car and brought her to the PSPCA. Soon after, the dog they called Ava was adopted.

“It felt good,” said Cheatham, who was so inspired she created her rescue, The Black Thornberry, named after a Nickelodeon cartoon character who talks to animals. Since then, Cheatham, better known as Nina Love on social media and in rescue circles, has found foster homes for stray animals, helped fund veterinary care and provided free food for pets to owners in need.

“I want to use my platform so other people can see it’s possible,” said Cheatham, 31, a vet tech. “I feel like as a black woman, they need to see that they can do it too.”

Across the country, animal welfare leaders say their movement needs more voices like Cheatham. They are calling for greater diversity within their own ranks, as well as more programs that support a more racially, culturally and economically inclusive view of pet ownership.

“The fact that 70% of Americans have pets shows how much this country loves animals and considers them part of the family,” said Julie Castle, CEO of Best Friends Animal Society, America’s largest organization. unkilled animals in the world. “There’s a lot of diversity in that 70%, and we should represent the communities we serve.”

In recent years, two of the nation’s leading pet charities have made diversity, equity and inclusion a fundraising priority, just as other institutions have focused on greater social justice. .

Last year, Maddie’s Fund, one of the charities, handed out $1 million in grants to help animal organizations run by people of color – and The Black Thornberry was one of them.

PetSmart Charities has injected $15 million into its ongoing campaign to make veterinary care accessible to the roughly 50% of pet owners who struggle to afford it. In Philadelphia, that campaign included partnering with Emancipet, a nonprofit animal care organization, to open a new low-cost veterinary service and spay/neuter clinic last July at the PetSmart store on Roosevelt Boulevard.

“We don’t believe that socio-economic barriers should prevent anyone from enjoying the company of a pet,” said Kate Atema, director of grants and community initiatives for PetSmart Charities.

CARE (Companions and Animals for Reform and Equity), a national advocacy group whose mission is to increase diversity and inclusion in animal welfare, is hosting its first conference in Philadelphia October 6-8. He will publish new research he commissioned that affirms the close relationships people of color have with their pets.

“Different cultures may celebrate the human and animal bond in unique ways, but this study proves once again that ‘love is love,'” said CARE co-founder James Evans. “BIPOC (Black, Indigenous, People of Color) Americans are connected to their four-legged family in the deepest way.”

CARE is advocating for more BIPOC leaders in animal welfare, an area that CARE and many other members of the movement say has long been predominantly white. The reasons are many, but Evans said they include people of color who aren’t wanted or intentionally or unwelcome by predominantly white institutions. Additionally, Evans said, because people of color in America disproportionately face economic challenges, they may not have the time to devote to animal welfare, which relies heavily on volunteerism. . And with fewer BIPOC people involved, he said, they are less likely to become leadership candidates.

According to CARE, increased BIPOC leadership on animal welfare could lead to more culturally sensitive programs, including adoption policies that could reduce the number of animals in shelters.

“We all have prejudices. It’s part of the human experience,” Evans said. “We’re asking people to examine these biases against real data and real information.”

Miller, 69, an experienced pet owner who is black, had filed 18 applications at various shelters and shelters to adopt a dog. Not all responded or rejected it.

Miller said a Great Dane rescue told her she didn’t have enough money to keep a Great Dane – even though her last two dogs were Great Danes and she had a steady income, not to mention of a fenced yard.

CARE reached out to their network and put Miller in touch with The Animal Adoption Center in Lindenwold, who had a Great Dane who needed a home.

Soon, a tearfully elated Miller took Rudy, a tanned Dane, to his home in Baltimore.

Evans said he believed Miller had been discriminated against because of his downtown Baltimore zip code and his age.

“It was a nightmare and it was very humiliating,” Miller said of the rejections.

In a city as diverse as Philadelphia, some of the major animal welfare organizations have expanded their programs to keep existing families between humans and animals intact.

“When we all started, it was very animal-focused,” said Melissa Levy, executive director of PAWS. “Now it’s a lot about both ends of the leash.”

The PAWS adoption process is an initial application and then a conversation between the person who wants to adopt and a PAWS adoption counselor to help achieve a successful animal-person match, not to eliminate people based on factors such as income, according to Levy.

This conversation can include a discussion of the supports the new owner might need.

PAWS and their colleagues at the PSPCA have increased their low-cost, free veterinary services and have community outreach programs that offer a multitude of services to all pet owners. This has included partnerships with other community groups to distribute pet food and other resources. PAWS recently launched a temporary foster program to foster short-term animals whose owners, due to housing or other issues, may otherwise have to give up their pets. The agency is looking for more host families so it can expand the program.

PAWS helped Charlotte Winslow, 71, of South Philadelphia, remove a large growth from one of the paws of Obie, a poodle mix that had belonged to her late husband. Winslow said she couldn’t afford the $1,300 a private vet wanted to charge her, but she couldn’t imagine life without Obie.

“It’s my company. I say there are two people here: Jesus, me and the dog,” she said. “As long as I live and God gives me breath in my body, I will take care of this dog.”

Adell Johnson, 41, a home health aide from South Philly, said PAWS provided her with three months of dog food when her working hours were significantly reduced during the pandemic.

“It was absolutely amazing. I couldn’t ask for anything more during these difficult times,” she said. “My dogs mean as much to me as my children.”

Animals have meant a lot to Cheatham since she was a little girl, when her mother, a science teacher, taught small creatures and her pet rabbit Fluffy was her escape from bullying at school and other places. problems.

His favorite cartoon was The Wild Thornberrys, about a family who travels the world in an RV to make wildlife movies and their daughter Eliza who could talk to animals.

Now that she’s launched her nonprofit, The Black Thornberry, Cheatham has been trying to raise money to buy a van for her animal rescue work in the Philadelphia area.

A few months ago, Cheatham appeared on the Ellen Show to talk about her rescue and the need for diversity in animal welfare. She received $10,000 to help her with her work. In addition to support from Maddie’s Fund, she has also secured other grants. She also does her own fundraising to pay for things like her pet food deliveries and animal health needs.

She hopes hearing about The Black Thornberry will inspire others to take action.

“The next day they see an injured animal, maybe they’ll think back and say, ‘She did that the other day. Let me see if I can help,” she said. “I want people to understand that they can do it too.”