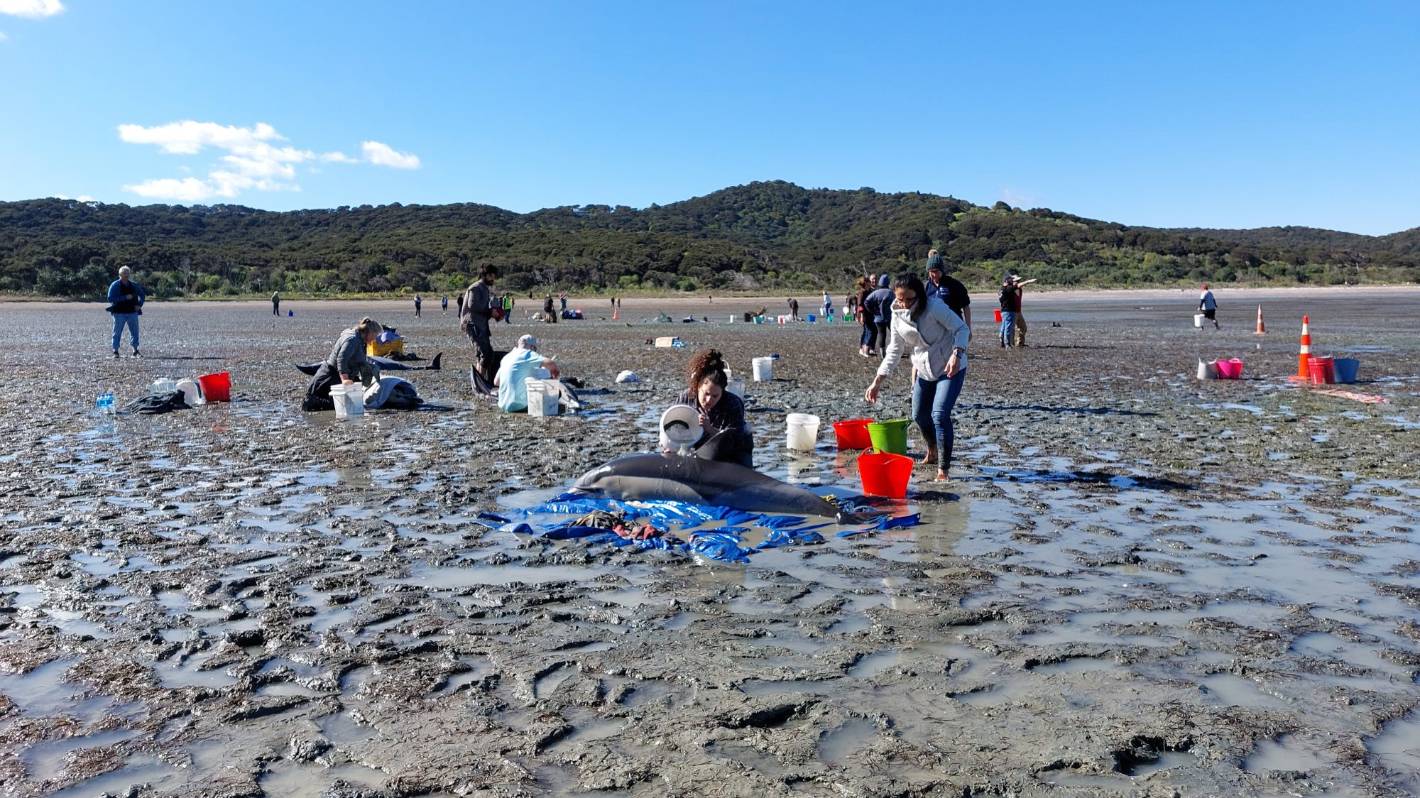 Seven dolphins from a pod of 10 stranded in Whakanewha Bay on Auckland’s Waiheke Island were refloated late Friday afternoon.

A Department of Conservation spokesperson said the dolphins were seen returning to the Hauraki Gulf, with a juvenile dolphin returning to deeper water just before 4 p.m.

“At 4:40 p.m., the remaining dolphins had been successfully refloated, left the bay and were last seen heading for deeper water,” DoC spokeswoman Emma Kearney said.

An adult dolphin and a calf died earlier today and were due to be taken to Massey University for an autopsy.

DoC personnel had been working at the scene since noon, alongside the marine animal rescue group Project Jonah, the local iwi Ngati Paoa and members of the Waiheke Island community, in an effort to bring the dolphins to comfortable with a view to bailing them out.

Killer whales have been reported in the area in recent days, Stockin said, which was concerning because “killer whales may hunt other aihe (dolphins)”.

Stockin explained the protocol regarding the treatment of the two deceased dolphins.

“They have been blessed and will come to Massey University and then we will take them back to Waiheke to bury them with their whanau,” she said.

The site will be checked on Saturday morning in case the animals get stranded.

“We would like to thank Ngāti Paoa, Project Jonah and the local community for their contributions to the rescue,” Kearney said.

Dave Chandler, supervisor of the DOC’s Auckland Continental Operations team, said the reasons for the mass grounding may remain a mystery. “We may never know why they ran aground,” he said.

Earlier on Friday, Auckland Council’s regional park manager for Whakanewha, Natasha Belesky, said the council no longer wanted people to visit the site because their presence was stressing the dolphins.

Island resident Micky Old joined the rescue effort after discovering the grounding just after 11am. She worked in a nursery and came right away.

Rose Davis was also among those pouring water on the dolphins. She discovered the grounding around 11:30 a.m. while baking cookies. She turned off the oven and immediately went to the scene.

“I will stay until the dolphins swim in the sea,” she said.

“I have lived on the island for 25 years and have always loved dolphins.”

The Jonah Project said it was coordinating with the Department of Conservation and responding to the incident.

“We have local doctors on site and senior staff with equipment on the way,” a spokesperson said.

Auckland Central MP Chlöe Swarbrick said she would be on the island at 2.30pm and would give updates as they come.

During a briefing for volunteers on Friday afternoon, Kaiwai Rhind (Ngāti Paoa) said that a collaboration between mana whenua, DOC and Project Jonah is underway.

“They are our tupuna (ancestors), they talk to us and we try to respect their choice,” she said.

“We’re talking with DoC and Project Jonah about what we’re going to do as a rōpū (band), we’re working with them.”

“Two dolphins have died. It’s a tangi, a graveyard, we have to be respectful,” said Louisa Hawkes, volunteer coordinator of the Jonah Project.

“The conditions here are not ideal for the dolphins, we can help them by staying calm and keeping them cool.

“The sheets that cover them help retain water.”

Hawkes said they would keep the dolphins cool until high tide, which was around 7:36 p.m.

CORRECTION: An earlier version of this story stated that Natasha Belesky worked for the Department of Conservation. She works for Auckland Council. Updated at 4:10 p.m., August 12, 2022.