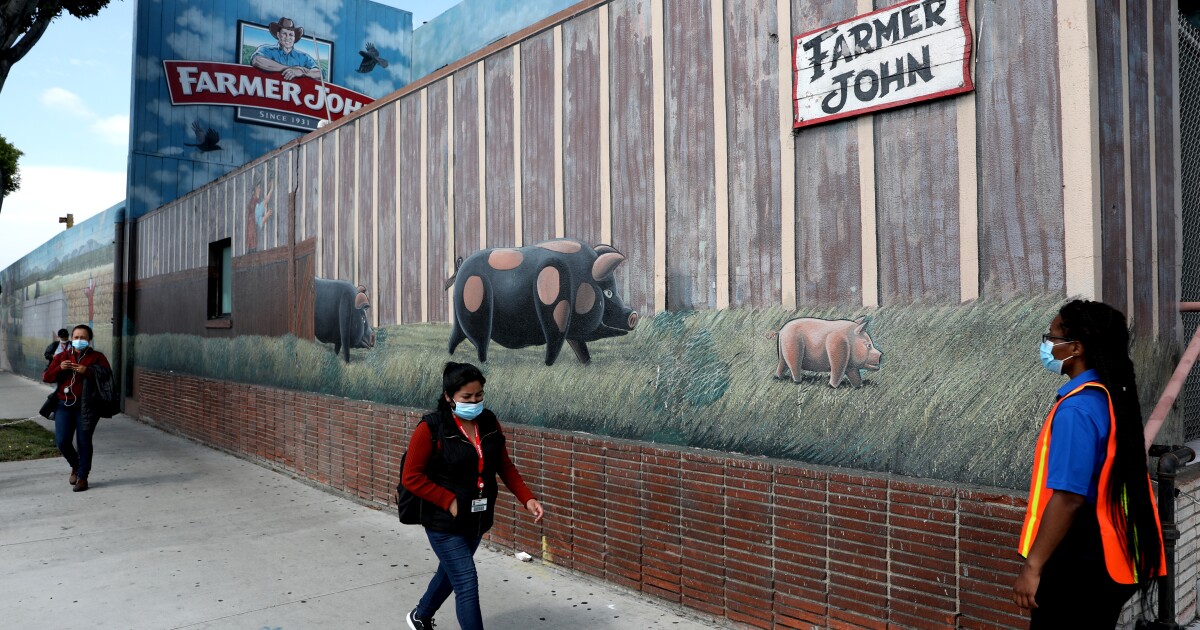 Visitors to Los Angeles often put on their bucket list the Hollywood Sign, the Venice Boardwalk, the Watts Towers and, for the more adventurous and less nosy, Farmer John’s Meatpacking Plant in Vernon.

A favored destination for scouts, camp aficionados, muralists, and hot dog connoisseurs, this hidden slaughterhouse stood out less for what went on inside its walls than for its civic conditioning.

At the corners of Bandini Boulevard, Soto Street and Vernon Avenue, tourists and locals alike can admire scenes of a bucolic, agrarian past like Los Angeles has never known. Painted pigs frolic through green fields by meandering streams under cloud-strewn blue skies, blissfully unaware of the fate that awaits them inside.

This fate took a slightly different turn on Friday when the owner of the establishment, Smithfield Foods, announced that the establishment would close early next year. The Virginia-based company said the step was necessary due to “the escalating cost of doing business in California.”

The fate of the building has not yet been determined. “We are exploring all of our options,” said Jim Monroe, Smithfield’s vice president of corporate affairs.

Still, he added, “Farmer John is alive and well, and we will provide the great, healthy and nutritious products that Farmer John customers have come to expect,” albeit from another location.

The city of Vernon was less optimistic. “We are saddened,” City Manager Carlos Fandino said.

“Farmer John’s closure announcement represents yet another nail in California’s coffin, indicating that another leading company is on the verge of leaving the state,” said the president of the California Chamber of Commerce. Vernon, Marisa Olguin.

Monroe said Smithfield was offering employees a $7,500 bonus to continue working during the shutdown, and the union representing meat packers in Vernon issued a statement expressing hope that another operator will take over the plant and Workforce.

Animal rights protesters have long made the factory a favored site for their protests, accusing Smithfield of animal cruelty and worker exploitation and calling on lawmakers to ban slaughterhouses and factory farms in California. (If pigs could fly: For a while, goose liver was off the menu.)

Meanwhile, workers at the plant would not speak officially about the closure, but one employee, who only gave his name as Omar, said Smithfield Foods described a meeting ” everyone on deck” on Thursday morning, and employees were told not to speak. to the news media.

Omar said the company and the meat union had struggled to negotiate. “I guess Smithfield thought it was easier to close the plant,” he said.

A worker who was hired in the last few months said information was scarce and “nobody really knows anything about our jobs or our future”.

“It sucks because we just want to work,” he said.

Vernon’s neighbors were more forthcoming with their opinions.

Herman Valle, who works across the street at the Green Olive Mediterranean restaurant on Soto Street, will be relieved to be done with the “terribly strong” smell he attributed to the plant.

On Monday, he said, two alfresco diners were having breakfast on the terrace when they quickly grabbed their plates and rushed inside. It was not the first time.

“It’s usually around 9 a.m. that the smell is so strong and overpowering that we have to close the doors,” Valle said. “Everyone who eats out runs inside because it’s so loud.”

Agustín Álvarez, manager of the adjacent El Primo Mexican restaurant, was less certain the plant was responsible for the stench.

“It’s easy to point to the big factory and say the smell came from there,” he said. “We are in a city of factories and factories. The smell can come from anywhere, including the river and other rendering plants.

Álvarez, however, is less concerned about the smell and more about the loss of jobs.

“My heart goes out to the workers who have lost their jobs,” he said. “They’re coming in, maybe around 50 or more a day, so it’s a big loss everywhere.”

The factory’s New Year’s Eve order — 70 trays of rice and 70 trays of beans — was a nice holiday bonus, Álvarez said.

For many Angelenos, however, the loss can be disappointing. Many are still reeling from Smithfield’s decision at the end of the 2019 Dodgers season not to renew its contract with the team in blue.

Famous farmer John Dodger Dogs was no more, and fans lost a familiar brand (Papa Cantella’s Dodger Dogs just don’t ring the same) made even more famous by the legendary voice that peddled it.

“The most Eastern quality, the most Western flavor,” their pitcher, Vin Scully, intoned for nearly half a century, words that almost rivaled his famous opening line: “It’s time for the Dodger baseball!”

In a city that changes so often, nostalgia is a difficult notion for Angelenos to live with, but Smithfield’s decision jeopardizes a treasured artistic landmark.

When Leslie A. Grimes lifted his brush in front of the Clougherty Meatpacking Plant in 1957, the town was more tolerant of its less than delicate industries.

Near the Los Angeles River, this neglected part of town is straight out of “The Jungle,” Upton Sinclair’s nosy look at Chicago’s meatpacking industry. But Grimes’ portrayal was decidedly less scathing.

Working on a mostly cinderblock canvas covering more than 30,000 square feet, he lavished his somewhat bizarre trompe-l’œil featuring over 200 pigs (yes, they were counted), allowing motorists and pedestrians to engaging in a Tom Sawyer/Sadie Hawkins-esque vision of pig farming where Farmer John could actually be Old MacDonald’s next door neighbor.

For 11 years, Grimes – an Austrian immigrant and former movie scene painter – worked on the vignettes, even once indulging in a portrait of himself on 37th Street standing on a ladder painting a pig. Norman Rockwell would be proud.

But as the ancient sages once thought, ars longa, vita brevis (life is short, art is long), and in 1968 Grimes met an unfortunate end, falling from scaffolding outside the factory.

His replacement, Arno Jordan, accepted responsibility for maintaining and upgrading the work.

When asked by The Times if he had ever thought of the pig he painted in anything other than aesthetic terms, Jordan replied, “No…I didn’t want to spoil my appetite.”