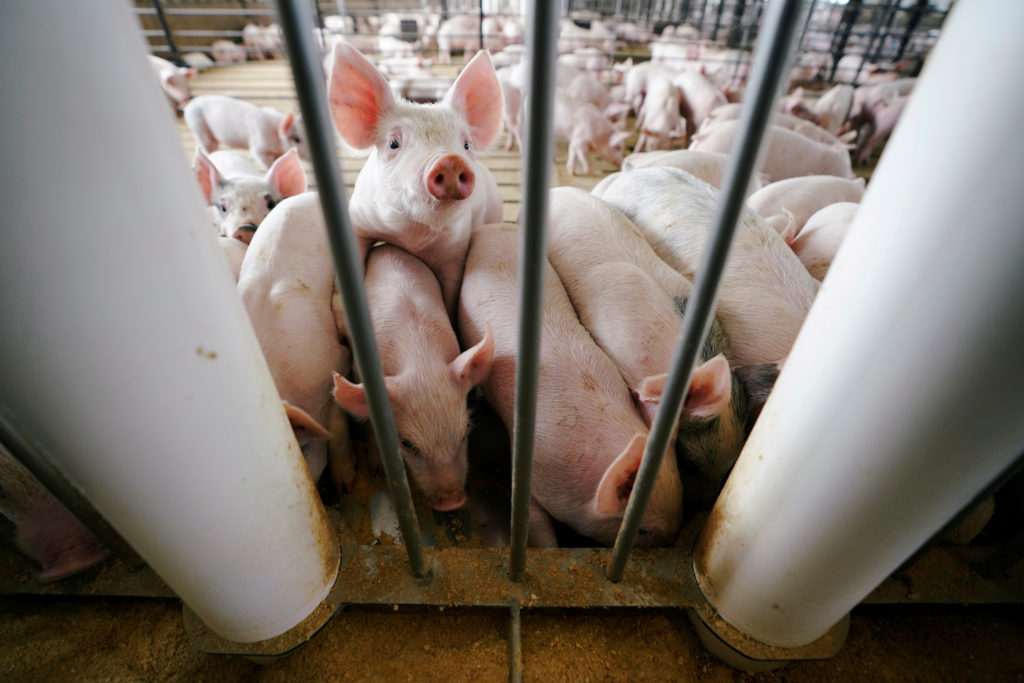 Should Californians be able to demand higher welfare standards for farm animals raised in other states if products from those animals are to be sold in California? The U.S. Supreme Court will be faced with this question when it hears oral arguments National Pork Producers Council v. Ross on October 11, 2022.

Pork producers challenge a law that California voters adopted in 2018 via a ballot initiative with more than 63% approval. It sets new conditions for the raising of pigs, veal calves and laying hens, the meat or eggs of which are sold in California. The state represents around 15% of the US pork market.

On most commercial hog farms, pregnant sows are kept in “gestation crates” which measure 2 feet by 7 feet – enough space for the animals to sit, stand and lie down, but not enough to turn over. California law requires that every sow have at least 24 square feet of floor space – almost double the amount most receive now. It doesn’t require farmers to raise pigs free range, just provide more square footage when raising pigs in buildings.

The National Pork Producers Council argues that this requirement imposes heavy compliance costs on farmers across the United States, as large hog farms can house thousands of sows and that it restricts interstate commerce. The Commercial Clause of the Constitution delegates authority to regulate interstate commerce to the federal government. In a series of cases over the past 50 years, the Supreme Court has made it clear that it will strike down any state law that seeks to control commerce in another state or give preference to commerce in the state.

Farmers and animal welfare advocates understand that if California wins, the states with the most progressive animal welfare policies – primarily the West Coast and Northeast states – will be able to effectively set national standards for the welfare of many farm animals, including chickens, dairy and livestock. In theory, California might also be able to require basic conditions for human labor, such as minimum wage standards, associated with products sold in California.

Nine other states have already passed laws requiring pork producers to phase out gestation crates. The Massachusetts law would also apply to retail sales of pork raised elsewhere, such as that in California, but its application is suspended pending the Supreme Court’s decision in the California case.

The main federal law that regulates the living conditions of animals is the Animal Welfare Act, which was enacted in 1966. Among other things, it requires the Department of Agriculture to adopt humane regulations for the keeping of animals that are exhibited in zoos and circuses or sold as pets. However, farm animals are explicitly exempted from the definition of “animal.”

While the federal government is silent on farm animal welfare, each state clearly has the authority to regulate this issue within its borders. For example, in recent years, nine states have prohibited from housing laying hens in “battery cages”which have been the industry standard for decades. These cable boxes are so small that birds cannot spread their wings.

Since many states still allow battery cages, the quality of life for laying hens depends on the state in which they reside.

It is also clear that the State of California does not have the power to pass laws that are binding on farmers in other states. This case sits between those two points – here’s how:

California law states that if producers want to sell pork in California, they must raise pigs under conditions that comply with state regulations. Farmers are not required to meet these standards unless they wish to sell in California. The same requirement applies to growers located in California and those based elsewhere, so the law does not directly discriminate between states in a way that would be a clear violation of the trade term.

Producers of eggs and calf who sell in California are on track to implement new space requirements for their animals under the law. In my opinion, however, much of the pork industry seems to be in denial. Instead of figuring out how to comply, the National Pork Producers Council wants the courts to strike down California’s law.

Even as this case progresses, however, major producers, including Hormel and Tyson said they would be able to meet the California standard. Niman Ranch, a network of family farmers and ranchers who raise livestock in a humane and sustainable way, has filed an amicus brief with the Supreme Court supporting California.

Certainly, pig farmers have invested millions of dollars in their existing facilities, and the system efficiently produces huge amounts of cheap pork. But Californians have taken the position that this production comes at an ethically unacceptable cost to the animals in the system.

In considering this case, the Supreme Court will be faced with two questions. First, is the California requirement a burden on interstate commerce? A U.S. District Court in California has ruled that the answer was noand the U.S. 9th Circuit Court of Appeals upheld that decision.

There is no magic formula for what constitutes a burden on interstate commerce, so it is impossible to know in advance what the Supreme Court will say on this point of the case. The current Court did not address this issue.

If the court is to decide that California law restricts interstate commerce, then it must determine whether the measure satisfies the “Pike test,” which was set out in the 1970 ruling. Pike v. Bruce Church, Inc.. In that case, the court held that a state law that “regulates impartially” must stand unless the burden the law imposes on interstate commerce “is clearly excessive in relation to the putative local benefits.” In other words, is the social interest of Californians for better pig welfare far outweighed by the economic cost to producers?

In another 2010 decision, United States vs. Stevens, the court acknowledged that “the prohibition of cruelty to animals itself has a long history in American law, beginning with early colonial settlements”. However, the court found that the depictions of animal cruelty — the plaintiff had been convicted of producing and distributing dogfighting videos — constituted protected speech under the First Amendment and that that protection trumped the speech. society’s interest in promoting animal welfare.

This video from the Rodale Institute, a nonprofit that researches, trains and educates consumers about organic farming, compares pasture-based pig farming to the large-scale, confined model that dominates the pork industry.

Is a national standard in the cards?

Many animal welfare issues involve finding this kind of balance between ethical positions and economic consequences in a political context. It’s like mixing oil and water, which makes predictions difficult.

The biggest unknown is what the new Supreme Court justices will bring to this case. Only four current judges – John Roberts, Clarence Thomas, Samuel Alito and Sonia Sotomayor – were members of the court when it ruled on the Stevens case in 2010. Will today’s court support the right of the California to regulate products sold within its borders, or meat companies? economic argument? How many judges will see farm animal welfare as an important public concern?

I expect the court to uphold the California law — and that if that happens, within five years ranchers will propose nationwide legislation setting uniform welfare standards for farm animals. It is impossible to predict today whether a national law would improve animal welfare or adopt existing welfare practices.

This article originally appeared on The Conversation. Read the original article here.