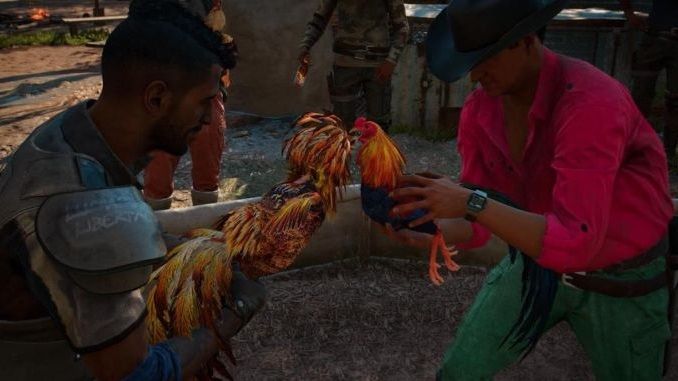 You can criticize cockfights in Far Cry 6 without being racist

Let’s do it from the start: cockfighting is cruelty to animals and sucks. And so is the American meat packaging industry that supercharges chickens and locks them in cramped cages where they can’t even move just to process them for your dinner. Now that this is settled, let’s talk about Far cry 6 and the little mini-game that could: cock fights.

If you don’t know what cockfighting is, simply put it is when people breed young roosters, or roosters, to make them fight for entertainment. It’s a centuries-old spectacle where people bet on gamecocks, and some even rig games with gnarled cruel methods like tying razor blades to their feet. I’m not here to debate the cruelty of cockfighting – that’s pretty obvious – or to endorse it. But what I’m here to do is push you – yes, you– to think about how you see it in the context of a culture where cockfighting is common.

I’m sure if you’re an American with no connection to a culture where this is common, you probably dread the mere thought of this violent hobby turned into a Tekken-esque minigame in an AAA title like Far Cry. I’ve seen a number of white Americans do just that on Twitter. Some are completely baffled by the inclusion of the mini-game. Others try to strike up conversations with bogus equivalences to compare them to dog fights, and still others are baffled that you can have an amigo (a playmate) that is a gamecock and also gives players the opportunity to participate in cockfighting.

All of them come with that distinct ring of a ‘we don’t do this here’ mentality that often defames elements of cultures abroad. Whether it’s diet specialties or traditions, Americans often stand above what they see in other cultures and, in doing so, are completely unaware that where you are geographically and culturally. can dictate how much you value certain things. For example, I’m a furry mom and would do absolutely anything for my dog, and I live in a culture that allows me to do that. But this is not the norm in all cultures. Heck, even in my own family, the idea that I would let my dog ​​sleep in my bed or even just live in the house was overdone.

Animals are not the same in all cultures, and as an animal lover it sucks to know. But it’s also something that I experienced growing up. My family also raised chicken to eat. My grandfather regularly brought home cute deer and rabbits and showed me how to skin them. And although cockfighting is not the same thing, it should be understood as something that is rooted in certain cultures, not only Latin American cultures either, but also other island cultures like Guam, the Philippines. , etc. In fact, in other countries it is not even clandestine activity as it is in the United States, but rather accepted as sporting events that take place in full view.

In Mexico, the rooster fighting season runs from November to June and became a sport in the culture after farmers started raising and fighting roosters over a century ago. It’s illegal in some places like Mexico City, but often allowed in other Mexican states, mainly during regional fairs. Some states in Mexico and Baja California use cockfighting to attract American tourists. In the Philippines, cockfighting is regulated like any other gambling (or gambling) business, which allows the country to generate income.

And although cockfighting is illegal in Jamaica and Puerto Rico, that was only recently. banned in the latter when Congress made it illegal in U.S. territories after lobbying by animal rights activists– other Caribbean islands like the Dominican Republic, Cuba and Haiti all have cockfighting industries, with Haiti’s televised rooster fights rival football matches.

It is even more established in Honduras, where they have protected cockfighting (and bullfighting for that matter) from being made illegal because it is part of “national folklore”. And you should know that this protection of game comes from a law that prohibited cat and dog fights in the country. Likewise, Panama also allows cockfighting banning dog fights, animal races, bullfights – whether Spanish or Portuguese style – and circuses. Even in Indonesia, cockfighting when carried out for religious purposes is legal, although secular cockfighting and the games of chance that accompany it are illegal.

Yes, heritage is not doing something right. It does mean, however, that when discussing something as mundane as cockfighting, the conversation needs to be framed in a way that isn’t, well, racist.

Growing up I knew people who witnessed underground cockfighting, and although it has become a pop culture trope, it is based on a very real hobby. Thus, its inclusion in Far cry 6 is not only self-explanatory, but also one of the best-executed elements of satire in the game. Cockfighting is brutal, just like fighting games. By sanitizing certain items and allowing the player to choose from a list of roosters, perform moves, and hear classic announcer items, a cultural item is turned into a joke that lands for those who know it well. In fact, it’s downright smart and it doesn’t hit you. Far cry 6 don’t say “oh look at those brown people who fight roosters; Instead, it takes a cultural element, exaggerates it and puts the player straight into it. It works.

That said, it clearly doesn’t work for everyone, and that’s okay. But when the conversation turns into moral demagoguery over its inclusion, or draws parity with how most white Americans view animals (while ignoring how those huge Tyson chicken breasts were born), it becomes a value judgment no. not on cockfighting but on the people who are involved. the joke.

Like I said at the start, cockfighting is cruelty to animals, and for the most part, the people of color who chat and laugh about the online minigame bluntly admit it. However, this statement is accompanied by a “but” attached. This “but” is because we grew up with people who did, we grew up knowing it, we grew up in cultures where it was just part of life, and this cultural connection cannot. be flattened. While cockfighting isn’t “right,” a minigame that makes it a joke isn’t “wrong” – or at the very least doesn’t exist in the American cultural vacuum.

In truth, as the “talk” shifts from “bad cockfighting” to “people who like this minigame are bad,” it’s weird to be brown in this space. I assure you that the pixels on the screen are good and that the people who make jokes and love Tekken cockfighting are in the joke and not running their own operations in real life. For me, I remembered the tio sneaking up to bet on a rooster named Pequeño and how he tried to pretend he wasn’t. Others just remembered living in places where it didn’t have to be a secret. So talk about cockfighting, question its inclusion in this game, but do it knowing who you are in conversation with, because once the game is released, it is not only with the developers, but also with the players.


Kate Sánchez is a pop culture journalist and co-founder of But why Tho? A community of geeks.

Marjorie Hopkins inducted into the Senior Hall of Fame